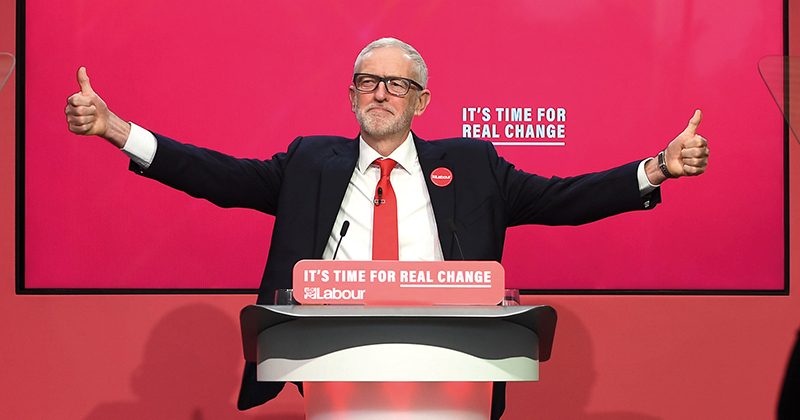 Labour has pledged to raise the base rate of per-student funding in FE to secondary-school levels and expand the apprenticeship levy if it wins power.

Jeremy Corbyn launched the party’s manifesto at Birmingham City University today ahead of the general election on December 12.

The Labour leader vowed that the party would “make lifelong education a right” and “value technical education as highly as academic learning”.

The manifesto said it was “more important than ever that people have the opportunity to retrain and upskill throughout their lives” with automation and the green revolution bringing major changes to industry.

If elected Labour would reform the apprenticeship levy by allowing it to be used for a wider range of accredited training, launch a climate apprenticeship programme and provide targeted bursaries to encourage the participation of women, black, Asian and minority ethnic people, care leavers, ex-armed forces personnel and people with disabilities.

The manifesto added: “We will reverse the fragmentation and privatisation of further and adult education, incorporating it into a single national system of regulation that functions for education as our NHS does for healthcare provision.”

It is not clear if this would mean that private training providers would no longer have access to public money or whether reversing privatisation would include apprenticeship funding.

Labour was approached to clarify the policy but had not responded at the time of publication.

FE Week previously reported that colleges’ status as independent corporations could be at risk under Labour’s plan for free lifelong learning in 2017, as the party wanted to bring them back under local authority control.

The Labour Party confirmed its intention to abolish the education watchdog, stating in the manifesto: “We will replace Ofsted and transfer responsibility for inspections to a new body, designed to drive school improvement.”

In the accompanying Funding Real Change document, the party announced it will spend £1.4 billion on the restoration of the education maintenance allowance, equalising 16 to 19 funding with key stage 4 and the Union Learning Fund (to give workers the right to accrue paid time off for education and training).

The gap in per-student funding between secondary and 16-18 education was 9 per cent in 2017-18, according to the Institute for Fiscal Studies.

The recommendations from Labour’s independent commission on lifelong learning, including free key stage 3 and key stage 4-plus (training with maintenance grants for disadvantaged learners) and the restoration of English for Speakers of Other Languages funding, would cost £3.3 billion.

As Labour announced last week, it would introduce a free lifelong entitlement to training up to level 3, as well as six years of training at levels 4 to 6, with maintenance grants for disadvantaged learners.

The manifesto states that all new spending, marked for 2023/24, is in addition to that announced in all previous fiscal events, up to and including spending round 2019.

“The Labour manifesto offers a strong package for the future, with the potential to make real change, for business, for individuals, and for communities,” he said.

“Their commitment to raising the base rate for 16-19 funding, offering a boost for adult and life-long learning, and the reintroduction of an education maintenance allowance, provides a vision for a society that has an ambitious, people-centred education and skills system at the heart of it.”

Mark Dawe, chief executive of the Association of Employment and Learning Providers, said apprenticeship delivery has a “key part to play in improving skills at all levels and we would be happy to work with a new government to see how reform of the levy can make a real difference”.

However, “we have repeatedly said to Labour, the Liberal Democrats and other bodies that allowing the levy to pay for other forms of training would be premature, especially when current demand for apprenticeships by employers means that the levy is now being overspent”.