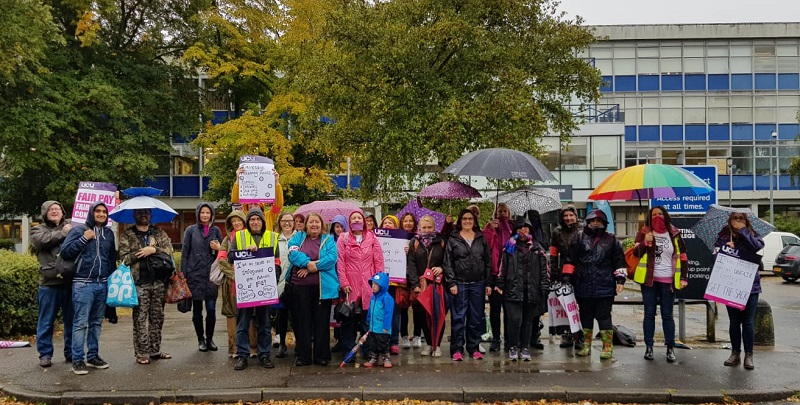 Nottingham College will be hit with yet more “unprecedented” strikes next month after staff accused their leaders of reneging on promises over workload.

Members of the University and College Union will take to the picket lines for another 14 days after the next half-term.

The action has been announced after staff entered their fourth week of strikes yesterday. They will have walked out for a total of 15 days this academic year over an increasingly bitter dispute.

It centres on the college’s alleged plans to impose contracts which would leave some staff more than £1,000 a year worse off, as well as reducing holiday entitlement and removing protections against work overload. Staff at the college have not received a pay rise since 2010.

The UCU said that the college has now backtracked on a commitment to limit teaching hours to 24 hours a week while a new contract is negotiated. It added that the college’s refusal to negotiate in “good faith” has left members with no alternative but to announce more strike dates.

UCU general secretary Jo Grady said: “For months we have been trying to negotiate with the college, but it has refused to budge and has forced staff to take this unprecedented action. The college’s refusal to work with us has left staff with no choice but to continue their action.

“The support for the strikes among staff and from elsewhere has been really encouraging. UCU members have made it clear that they are willing to fight against inferior contracts that will ultimately diminish the learning experience for students in Nottingham.”

Nottingham College chief executive, John van de Laarschot, said UCU’s intention to escalate industrial action is “extremely disappointing” and warned it will “serve only to increase the detrimental impact on our students”.

“We’ve been in constant dialogue with UCU at national level over the last few days, over the weekend and this morning, in an attempt to bridge the gap between the reported concerns of their members and the College’s offer,” he added.

“We’ve made a series of concessions specifically to address these concerns relating to trust, pay and workload but today it looks as if this was to no avail.”

Laarschot continued: “The college has not reneged on any commitments made. We are committed to ongoing dialogue and action to resolve the situation but we need our striking teachers to return to work so that we can deliver for our students and work together, collaboratively, to secure a long term solution that works for all.”

Staff are making some noise on day 8 of strike action at Nottingham College in the fight for #faircontracts!#FEfightsback #NottmCollegeDispute #loveFE pic.twitter.com/WPimgEYkcK

UCU claims some staff have already been “bullied” into signing new contracts.

In the strike ballot, 96 per cent of union members who voted backed the action.

UCU said almost 4,000 people have now signed a petition calling for Nottingham College staff to be given the contracts “they deserve”.

The second wave of strikes will consist of three and four-day walkouts over a four-week period covering most of November. The full strike dates for the second wave are: