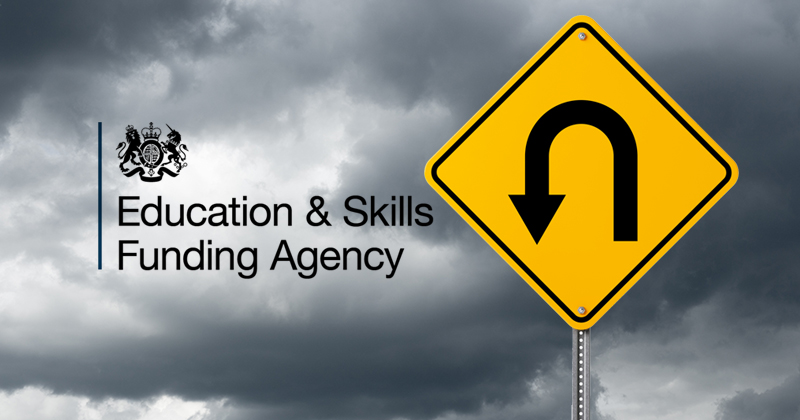 The Association of Employment and Learning Providers is lobbying government to U-turn on its proposal to introduce yet another data field for logging apprentices’ off-the-job training hours.

It comes after officials announced in May that from the 2019/20 academic year, a new mandatory field in the ILR would be added that requires providers to record “planned” off-the-job hours.

“It is another bureaucratic rule that focuses on administration not quality”

The requirements follow high-profile concern from the National Audit Office and Public Accounts Committee about non-compliance with the unpopular rule going unchallenged.

But providers have reacted angrily.

After FE Week reported the latest announcement on Friday, Jill Whittaker, the managing director of HIT Training, tweeted: “As an employer I am disappointed that the ESFA don’t trust my award winning organisation to give my #apprentices the right amount of training, as a #training #provider I’m irritated that the @ESFAgov see timesheets as a proxy for #quality.”

Tony Holloway, the operations director at Qube Learning, said it is another “bureaucratic rule that focuses on administration not quality”.

“The reason the industry is so split is because across the board rules aren’t suitable,” he added. “Some qualifications require more and some less. Where is the funding for the extra administration burden?”

The AELP is now urging the ESFA to reconsider.

“Data fields for 2020/21 were published this week – and surprise surprise the ESFA now want actual off the job hours,” the association’s chief executive Mark Dawe will tell his members today.

“We warned this would happen when it was optional recording of hours – and here we now are. Total waste of time, probably allows one stat to be provided showing actual hours delivered in apprenticeships and totally misses the point of apprenticeships.

“We will not let this one drop – all it does is introduce bureaucracy and cost for the provider and more importantly the employer – another nail in the employer led coffin.”

The extra data field for 2020/21 would “enable visibility of actual training delivered”, the ESFA said.

Further details will soon be posted to the feconnect forum and open for comments until 20 September, the ESFA said.

The ESFA previously said the mandatory field for logging planned hours will “help demonstrate compliance with the funding rules”.

In March the National Audit Office said in its apprenticeships progress report that the ESFA, in summer 2018, had just one “red risk” associated with delivery of the programme – that apprentices do not spend at least 20 per cent of their time doing off-the-job training.

The government’s spending watchdog warned that the agency has “limited assurance” in knowing whether the policy is being abided by, as even though audits may identify problems, there is “scope for providers to under-deliver for some time without this being picked up”.

“We will not let this one drop”

“This is an important gap in oversight, because the provider continues to be paid as long as the apprentice remains on the programme,” its report said.

Meg Hillier, the chair of the influential Public Accounts Committee, added that it was “concerning that the ESFA can’t be sure that apprentices are spending enough time on off-the-job training”.

The new mandatory ILR fields have therefore been introduced to mitigate the problem.

Deputy chief executive of the Association of Colleges, Julian Gravatt, said: “We understand the concerns of MPs about monitoring but we’re not convinced that loading more bureaucracy on colleges and training providers is the right reaction.

“The ILR specification is already 50 per cent longer than it was ten years ago and money spent on data collection isn’t available for anything else.”