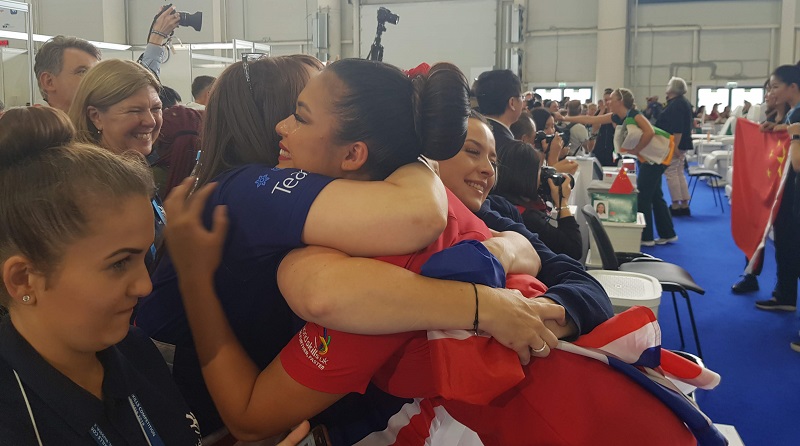 Team UK is finishing WorldSkills 2019 with thunderous applause and deafening cheers from a caravan of supporters.

A crowd of fellow competitors, team leaders, family members, friends and WorldSkills leaders cheered and clapped as each of the 35 competitors finished today.

Floristry competitor Elizabeth Newcombe, who finished shortly after 3PM, said she was “overwhelmed” by the support, while Rebecca West thanked her supporters in an emotional interview straight after she had finished her beauty therapy competition.

Thomas, in an interview with FE Week, said he wanted to “thank everyone that has helped me – the college, training manager and WorldSkillsUK.”

The remainder of Team UK will finish today by 7PM.

Competitors’ work will be scored, then medals will be awarded at the closing ceremony from 7PM on Tuesday evening, when WorldSkills Kazan 2019 will officially finish, and where it is believed Russian president Vladimir Putin will address the crowds.

WorldSkills UK will be broadcasting the ceremony on Showcase (Sky 192 and Freesat 161) from 5PM in the UK, and FE Week will also be bringing you live coverage on Twitter and on our website: feweek.co.uk

FE Week is proud to be the official media partner for WorldSkills UK and Team UK.

FE Week will bring you all the latest developments in the lead up to WorldSkills 2019 and is onsite in Kazan to bring rolling coverage of Team UK’s progress.To find out more about the what, when and why of WorldSkills, read our handy guide.