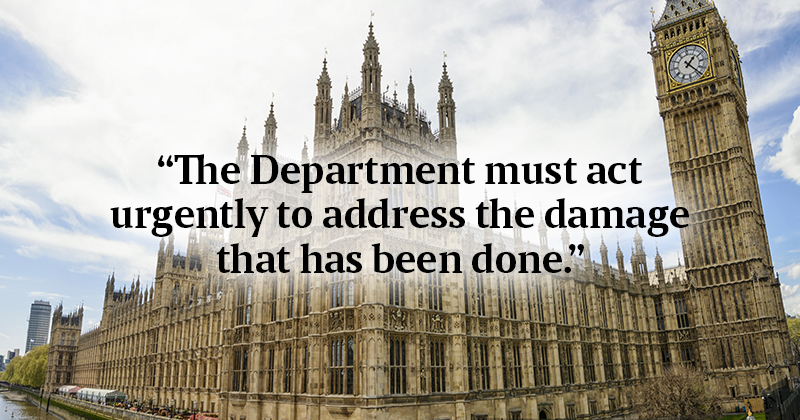 The government must “urgently address the damage that has been done” to FE by raising the 16 to 18 base rate as part of a multi-billion cash injection and produce a ten-year education funding plan, influential MPs have said.

A report by the parliamentary education committee into school and college funding has been released today following a number of hearings.

It describes a “troubling picture” whereby participation in full time further education has more than doubled since the 1980s, yet across 16 to 19 education, funding per student has fallen by 16 per cent in real terms since 2010.

During the inquiry, schools minister Nick Gibbs said the government “understood the challenges colleges were facing”, and was doing its “best in the context of a difficult financial situation following the 2008 financial crisis”.

The base rate funding per 16 to 18-year-old students has been stuck at £4,000 per year for the last five years. The committee heard this has led to numerous colleges being unable to increase staff pay, reducing their curriculum offer and other services such as mental health support.

The education committee has now backed the Sixth Form Colleges Association’s Raise the Rate campaign and said the government needs to increase the base rate to “at least £4,760”, which would amount to around £970 million per year, and rise in line with inflation.

“Post-16 education has been cut to the core,” today’s report said.

“We note the minister’s position about post-financial crash difficulties. Other sectors have however moved on. The continued underfunding of this pivotal stage in education is longer justifiable.

“These budget pressures are the result of political decisions that have had enormous impacts on young people’s educational opportunities and undermined attempts to tackle social justice. The department must act urgently to address the damage that has been done.”

The committee has also called for a ten-year plan for education funding – similar to the NHS’ Longer Term Plan – which it says is “essential”.

This way of planning would provide schools, colleges and the DfE with “much needed strategic direction and financial certainty,” the report said.

“We suggest the funding model should involve a multi-billion pound settlement from Treasury, informed by a bottom-up assessment of the cost of delivering a quality education for all children and young people.”

It continued: “The department needs to be transparent about how much money is needed for the education system.

“It must conduct and publish a comprehensive, bottom-up assessment of what services and support schools and colleges are having to provide, the real-world costs of delivering these activities and meeting attainment expectations, and how these costs relate to current school and college funding provision.”

Other recommendations made by the committee for FE include extending the schools Pupil Premium to support disadvantaged 16 to 19 year olds.

“We appreciate that there are some disadvantage funding pots available, but these are too small and spread too thinly,” the report said.

“Disadvantaged 16 to 19 year olds are not less deserving of support than under-16s. They should not be treated as a lesser priority.”

James Kewin, deputy chief executive of the Sixth Form Colleges Association, said today’s report is a “wake-up call to government – ministers must plan for the long term, stop neglecting sixth form education and prioritise an increase in the funding rate”.

Julian Gravatt, deputy chief executive of the Association of Colleges said failing to act on the committee’s recommendations “risks phenomenal damage to our country”.

A Department for Education spokesperson said: “We have protected the base rate of funding for 16 to 19 year olds until 2020 and are providing additional funding for the delivery of the new gold standard T-levels, rising to an additional £500 million every year once they are fully rolled out.

“We are glad to see that school and further education funding is being highlighted as an important issue ahead of the next spending review, where the education secretary will back the sector to have the resources they need to deliver world-class standards across the board.”

She added that the DfE welcomes this “detailed and considered report” and will respond in full in “due course”.