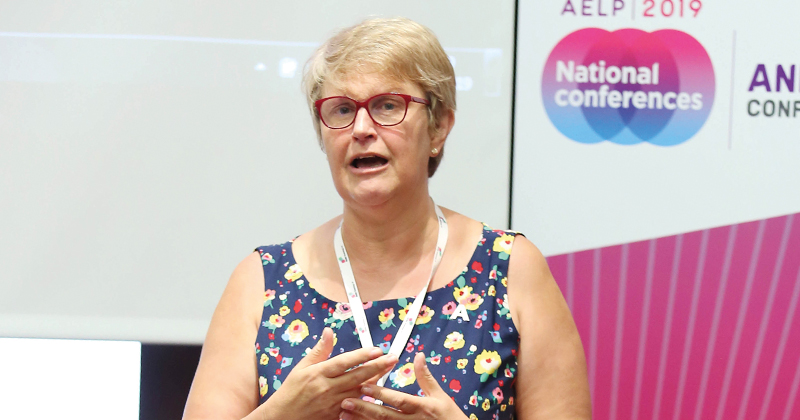 A senior policy advisor from the Department for Education has warned providers against using external bid writers to apply for a place on the refreshed apprenticeships register.

Sheila Sturgeon (pictured), who marks many of the submissions, has also urged applicants to not “nick” policies from other providers and claim it is their own while forgetting to change the name and branding – as some hopefuls have done.

I don’t see how anyone can fail

In addition to the new applicants, all 2,500 colleges, training providers and employers already on the register will be invited to reapply at some point this year.

Sturgeon, a civil servant working in the apprenticeships department of the DfE, talked through the do’s and don’ts for applicants during a workshop at the Association of Employment and Learning Providers national conference this week.

She would not be drawn on the success rate of reapplications from established providers, but said the RoATP guidance is “quite specific” and “I don’t see how anyone can fail” if the provider is “of the appropriate quality and has been trading for 12 months and has all the policies in place”.

But she did state that her “personal” opinion was that the application was more likely to fail if it was not written internally and a bid writer was brought in “to write it for you”.

When the old RoATP was running, during 2017, FE Week revealed how consultants were raking in thousands of pounds writing bids for training providers desperate to make it on to the new register at the second time of asking.

Sally-Ann Baker, managing director of London-based Bidright UK, said at the time she found it “incredible” how many “silly mistakes” providers had made with applications.

Her company had been approached by 25 to 30 providers on RoATP and took on 12 cases, all of which were successful. Bidright’s fixed rate is £2,000 plus VAT.

But Sturgeon cautioned providers against this, explaining: “The reason I say that is because we ask for specific examples. You need to tell us how your provider has made this policy real and live. It is really important that you find a good example and you use it, because that is probably where providers who aren’t as on the ball are likely to fail.”

The policy advisor said one shocking finding in some was providers “not having a particular policy, nicking one from somewhere else and forgetting to change the provider name”.

“I cannot count the number of those we have seen, and I am not joking,” she added.

The first organisations to be added to the government’s refreshed apprenticeship provider register were revealed the day after Sturgeon’s presentation.

It showed that 23 new firms have been enlisted – a smaller than expected number and strangely, all of them are only “supporting providers”.

An ESFA spokesperson explained that supporting providers are the “first portion of providers who have been added” to the register and new “main and employer providers will be added in due course”.

I cannot count the number of those we have seen, and I am not joking

The 23 are the first providers to be added to RoATP since October 2018.

FE Week reported last month that new applicants trying to get on to the strengthened register had been left hanging by the government six months after its launch.

The ESFA had planned to let providers know if they were successful 12 weeks after their bid. An agency spokesperson said last week that all providers that applied to be on the register in December, January and February have now “been notified of the result”.

The new register is expected to bring greater scrutiny, following various investigations by this newspaper that discovered, for example, one-man bands with no delivery experience being given access to millions of pounds of apprenticeships funding.

The ESFA will throw providers off the new register if they go 12 months with no delivery after joining the register.

“Applicants will be added or removed from the register as and when the full process of assessing applications has been completed,” the ESFA spokesperson said.