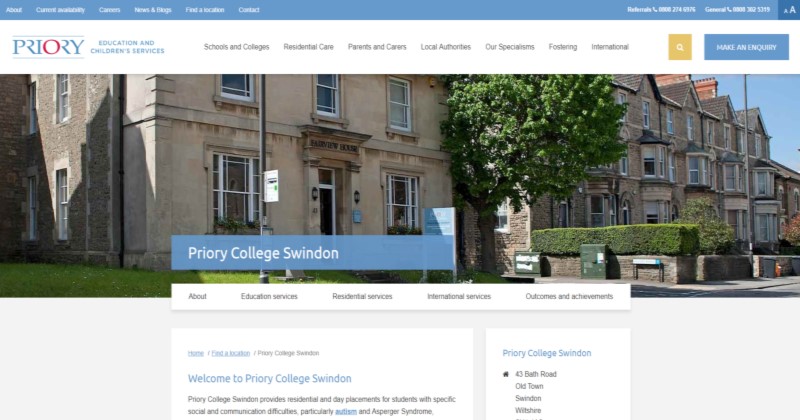 A specialist college, run by a famous private hospital which has treated the likes of Kate Moss and Robbie Williams, has been hit with not one, but two “inadequate” grades after Ofsted found damning safeguarding issues.

This week, the education watchdog has published reports into the residential and educational provision at Priory College Swindon, which caters for people with social and communication difficulties.

Inspections were conducted at short notice, after concerns were raised about student safety.

However, its college learners have not experienced star-studded provision, after the college was downgraded from grade two to four for both its educational provision to 37 learners, and its residential provision to 13 learners, including some under the age of 18.

Inspectors reported that “serious and widespread failures at the college mean young people are not protected and their welfare is not promoted or safeguarded”.

They found “significant shortfalls” in leadership and management in the residential provision, and that governance of the educational provision was “ineffective” because governors did not obtain findings from monitoring activities.

The college has insufficient staffing and resources, after inspectors discovered there was a lack of available tutors, art students were having to make do without sinks, and students faced difficulty setting up email accounts and using the web to look for jobs, due to restricted internet access.

The lack of tutors and internet access issues had led to a learner going missing from the residential accommodation.

Ofsted said that when a learner goes missing, the incident is not tracked or monitored well, they are not spoken to about it when they come back, and information is not shared with placing authorities – which organise accommodation for vulnerable people.

“Too many students are put at risk,” the report into educational provision found, while the residential report quoted learners saying they “do not feel safe living at this college, and feel unable to talk to staff about their concerns”.

The potential risks presented by adult learners living with under18s were not routinely assessed by managers, and both they and leaders do not consider effectively the physically aggressive behaviour of some learners.

Consequently, there was an altercation in which a learner sustained a minor injury, but staff recorded neither the incident, nor the injury.

There was also no record of when a learner was restrained by staff, which is contrary to requirements; nor was there any records on self-harm, online safety or bullying.

“Leadership and management are inadequate because of the failure to prioritise the safety and welfare of students,” inspectors wrote.

Leaders do not even meet with complainants face-to-face, and those complaints are not responded to within timescales, so one from 2017 had yet to be resolved at the time of inspection.

Ofsted has recommended the college ensure that it has an effective written policy to promote good behaviour among residential learners; and that a written risk assessment is drawn up to ensure the welfare of learners is safeguarded.

A Priory College Swindon spokesperson said they are undertaking a comprehensive review of the services, and new leaders had been appointed to improve student safety while a longer-term plan is finalised.

“We are also consulting with stakeholders about how best to provide the services in the future,” the spokesperson added.