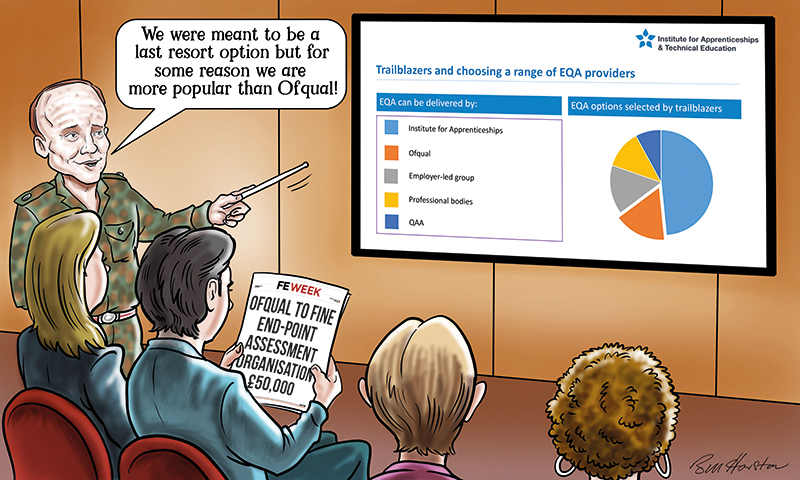 An end-point assessment organisation is facing a potential fine of £50,000 after “technical issues” affected its delivery of apprenticeship assessments.

The notice of intention to impose a monetary penalty on the Chartered Institute of Legal Executives (CILEx), published today, is the first such fine floated by Ofqual.

CILEx, an EPAO for two apprenticeship standards, admitted in March to a series of delivery failings in the end-point assessment for the level 3 paralegal apprenticeship in June 2018.

The failings “occurred during both the timed assessment and Interview components of the assessment and affected the entire cohort of 73 Learners,” today’s notice said.

Ofqual, which is CILEx’s external quality assurer, was informed at the time that “technical issues” were to blame.

This included apprentices receiving “error messages, experiencing delays and difficulties accessing the assessment, and being unable to upload their work onto the e-platform”. Some assessments were lost “entirely”.

In July 2018, CILEx reported that “further technical difficulties” had been encountered with the Skype connections for the interview component of the EPA, including difficulties establishing a connection between the assessor and the apprentice, poor connectivity and poor sound quality.

Only four of the interviews were fully conducted by Skype video, allowing the assessors to see the apprentice for the duration of the Interview, as required by CILEx’s assessment plan.

Complaints were received “regarding the disruption and anxiety”.

All 73 affected learners were given “special consideration” by offering them a free resit opportunity which would not cap the outcome at a pass.

CILEx wrote to Ofqual in January to explain that it “conducted a thorough investigation into both the technical and wider issues, submitting its findings to Ofqual voluntarily, together with an action plan”, which it has made “significant progress against”.

It said that CILEx is a “chartered body, not a commercial organisation, and as such has public interest duties, obligations and considerations as well as its responsibilities as an awarding body” while the absence of “key members of staff was a result of unprecedented and unpredictable circumstances”.

“CILEx genuinely believed that it could deliver the EPA in June 2018 to the required standard and in compliance with the Conditions, despite having to deliver under time pressure as a result of the late publication of the Assessment Plan,” it added.

“CILEx agreed to become the EPA Organisation for the Paralegal Apprenticeship in order to support the Government’s desire for legal apprenticeships despite it being a loss-making activity for CILEx. CILEx is the only body able to deliver the EPA.”

However, CILEx admitted to failing to comply with 17 conditions set by Ofqual.

The regulator formally issued the EPAO with a notice explaining its intention to fine it £50,000 on April 18, 2019.

However, the fine will be reduced to a nominal sum of £1,000 if the organisation submits a “Statement of Assurance” confirming that it has “successfully implemented all of the recommendations and actions set out in its Technical Action Plan” and “has successfully delivered the level 3 paralegal end-point assessment to the cohort of apprenticeship Learners sitting the EPA in June 2019, in full compliance with the Conditions” by September 30, 2019.

“Or, in the event that representations are received from interested parties or another relevant intervening factor occurs, such other amount between £1,000 and £50,000 as the Enforcement Committee considers appropriate,” today’s notice said.

“Ofqual has taken this approach to enforcement action in order to prioritise a focus on future improvements and to reflect the unusual circumstances of this case, including that CILEx operated the EPA at a financial loss in 2018 and expects to continue to do so for the foreseeable future.”

It added that CILEx has “agreed to pay a monetary penalty to Ofqual and to submit a Statement of Assurance in the terms specified above”.

Linda Ford, chief executive of CILEx, said: “We have apologised for the inconvenience caused to the students last year and provided free resits to a small number of students where needed.

“I would like to personally reassure this year’s cohort that we are ready and fully confident in our ability to deliver the EPA successfully.”

A spokesperson added that CILEx “expects to pay the reduced fine amount of £1,000”.