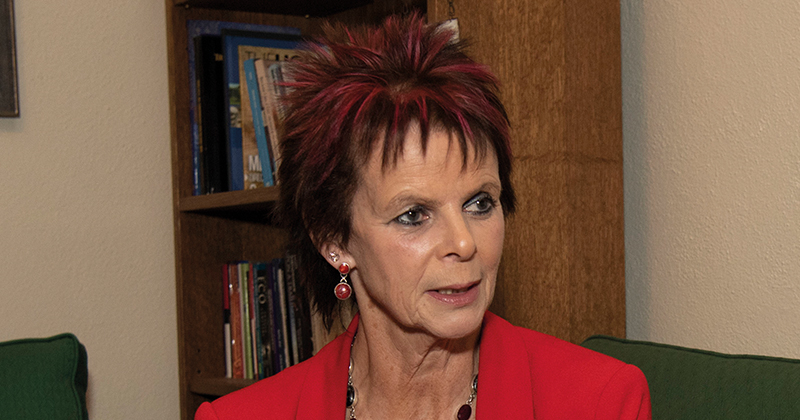 Anne Milton initially seemed in good spirits when I began our interview at a coffee shop at the University for East London’s (UEL) Docklands campus.

It was the morning of the third day of National Apprenticeships Week and she’d just finished meeting apprentices at an informal breakfast.

Despite the event not entirely going to plan (a falling roof tile that very narrowly missed the minister but left two apprentices grazed and in need of medical attention) Milton was unfazed and keen to talk to apprentices about their courses.

But it did not take me long to trigger a change in mood, pointing out that just a few hours earlier, the National Audit Office had published a report criticising the government on a range of issues relating to the apprenticeship reforms.

“It is always a shame when these reports come out because I think they have an important part to play in the development of government policy, but by their very nature they
are looking back rather than forward,” Milton said.

“It doesn’t always, I think, give a very accurate picture of what we are going to be seeing in six months’ time.”

Milton clearly thinks there will be significant improvements in the next six months, but what is the evidence for this?

Readers will recall that the minister predicted in February 2018 that apprenticeship starts would really take off by September, but the latest figures for December starts show they are slipping backwards, a full 8 per cent down on the previous year.

And last October it was announced that demand from small employers would be stimulated by halving their co-investment fee halved from 10 to 5 per cent.

More than four months on, the fee reduction has not been implemented and Milton was unable to even say from when it would begin.

“I would love to make an announcement now. Sadly, with much of one’s life in government, one waits for Her Majesty’s Treasury to say when you can do these things. And so we are always to some extent in the Treasury’s
hands.”

And on the thorny issue of limits to non-levy funding (UEL successfully tendered for non-levy, but was not awarded any, and is having to turn local businesses away), the promised changes to get small employers on to the Apprenticeship System keeps being delayed.

“Like with the reduction in co-investment, I am frustrated that the machinery of government is slow and sluggish, always. So I am somebody who wants to do everything yesterday,

Milton’s frustrations should not really come as a surprise, given in her first speech as skills minister, back in July 2017. She responded to a question about the fall in apprenticeship starts by saying: “I am somebody who has absolutely no patience at all. I want everything done yesterday, and I will only forgive not doing it yesterday if it’s in an attempt to get it right.”

One thing that clearly wasn’t done right was the Department for Education’s budgeting for apprenticeships.

My own published analysis, now confirmed by the NAO, had found the average cost of starts on standards was running at £9,000, which is double what the government had budgeted for.

“I haven’t seen how they got to the figures they thought it would be,” Milton said.

“But you always have to take a bit of a leap in the dark when the programme is being driven by employers.

“Added to which, if you are going to improve quality – quality and money don’t always go together – but it is likely it will cost you more. So whether the original forecasts took all that into account, I don’t know.”

This raised the obvious question of whether the budget needed to be doubled to afford £9,000 per apprentice, or whether the average could be brought down by, controversially, restricting employer choice.

“I think you want money spent on both,” Milton said.

“We have seen today 16-year-olds doing level 3 engineering. I mean, brilliant. But you also need businesses to be more productive, so people are thinking about how they manage. What sticks in people’s throats is people on £100,000 a year and the state subsidising their MBA.

“There is no easy answer. You put more money in the pot or you restrict what you are doing. Those are the choices.”

So it seems likely the Treasury will have to find a way to increase the size of the pot to get even close to the 3 million starts target and fund all the popular and expensive degree and management apprenticeships.

Even the NAO report points out that restricting employer choice in an employer-led system would not only be unpopular it “could damage confidence in the programme”.

Milton concluded by saying: “I always look for more money, I will always look at whether we are absolutely sure this is where public subsidy should go – looking at both
things, always.”