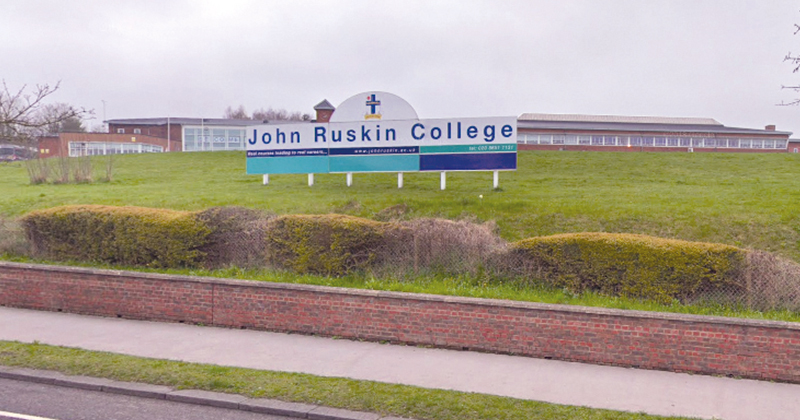 A sixth-form college that has fallen into trouble in recent years has been commended by the FE commissioner for turning itself around before a merger.

Richard Atkins’ team visited John Ruskin College in October after it emerged its financial health had declined rapidly, and it had dropped two Ofsted grades to ‘requires improvement’ in 2017.

The London-based college appears to have worked tirelessly to get back into shape, and the FE commissioner praised leaders for doing “well to maintain healthy cash balances and manage down external debt”.

The college has also tackled shortcomings in the quality of provision, according to the FE commissioner’s report.

A quality improvement board has been established and meets every term, and there is now “scrupulous tracking and monitoring of learners at risk of underachieving”.

The governors that the commissioner’s team met were said to be focused on the challenges facing the college in terms of both quality, finance and the wider FE landscape.

Apprenticeship provision has also improved, with overall achievement at 78.5 per cent, almost 10 per cent above the national average.

“There is clear evidence that the actions they’ve taken are having a positive impact on the quality of provision and on student outcomes,” the report said.

It added that students “demonstrated a strong sense of ambition and cited an extensive range of opportunities for engagement and student voice with enthusiasm”.

Governors are also “optimistic” about the prospects of the merger to improve student numbers and expand the range of curriculum on offer.

The commissioner’s report said that, given both colleges’ “strong balance sheets”, the Department for Education’s transactions unit concluded that “no restructuring funds should be necessary to support the merger”.

In a letter to John Ruskin College’s chair of corporation, Alec Stow, skills minister Anne Milton said: “I welcome the positive work the college has already undertaken to prepare for the planned merger with East Surrey College.”

A spokesperson for the college group said: “The merger generates a wealth of opportunity for us to grow and achieve together.

“It presents excellent opportunities for both colleges and we are already seeing growth potential.”

Furthermore, the college has confirmed that the commissioner’s recommendations – actions to improve budgetary control and to progress the merger with East Surrey College – are either complete or under way.

Despite the positives, the college is expected to run a deficit of 15 per cent of turnover in 2018/19.

The commissioner’s intervention was triggered after its financial health declined from ‘outstanding’ in 2015/16 to ‘satisfactory’ in 2017/18.

The college had become dependent on delivering apprenticeships for small businesses, but this came to a halt last year after it failed to secure a non-levy allocation for starts post-March 2018.

In his report, the commissioner warned the college still faces “significant” financial challenges.

“Governors and senior leaders rightly recognise the need for structural change as a result of the significant decline in turnover, substantial operating losses and the gradual erosion of cash reserves.”