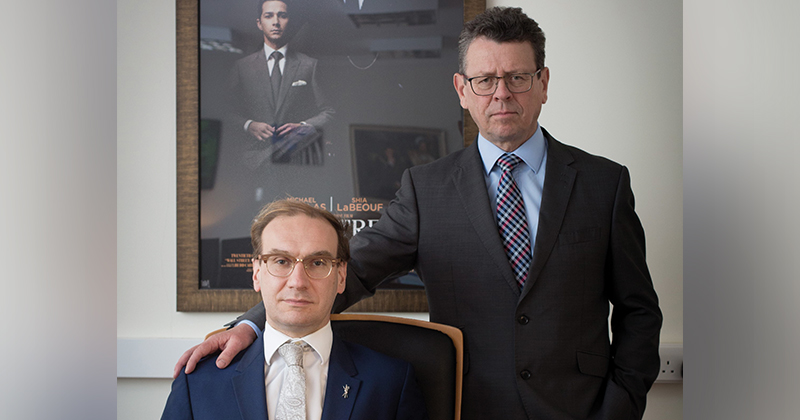 Hadlow Group is under intense scrutiny from the FE commissioner for accounting irregularities relating to land sales, FE Week can reveal.

The deputy principal, Mark Lumsdon-Taylor, resigned from the group at the end of January, and this week it was announced that the group principal and chief executive, Paul Hannan, is on sick leave following the first of two FE commissioner visits this month.

The investigation, FE Week understands, was triggered after a request for restructuring funds to the Department for Education’s Transactions Unit, which raised questions about a series of land purchases between Hadlow College and West Kent and Ashford College (WKAC), which make up the Hadlow Group.

Meanwhile, the Education and Skills Funding Agency (ESFA) is said to be looking to reclaim significant sums of funding from the Hadlow Group after concluding their own investigation.

It is understood the group was claiming funding they were not permitted to, but which Mr Lumsdon-Taylor said they had permission to claim, as part of the K College transition – something the ESFA disputes.

All of this comes at a sensitive time for both the group and the Department for Education as it is mere days after the new insolvency regime came in. If the college has to give the funding back to the government, it may need to rely on a short-term bailout and quick sale of property to avoid going into administration. 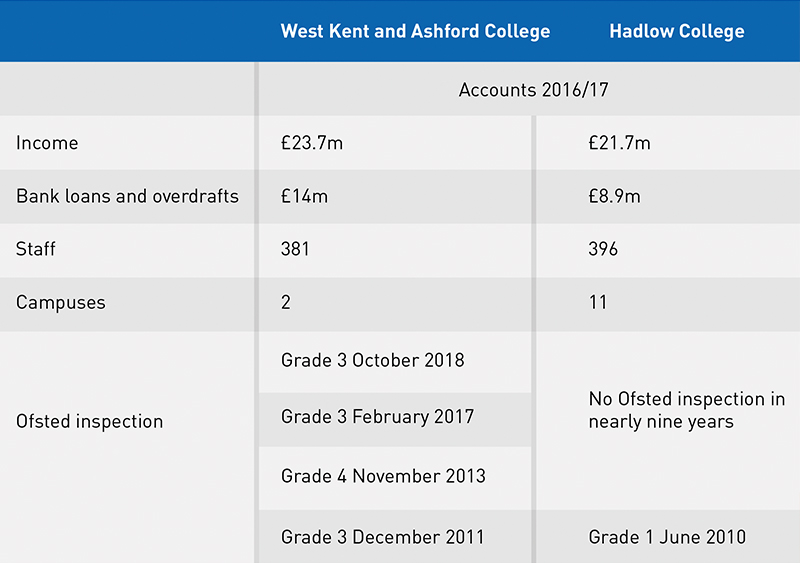 A week before the first FE commissioner visit, Mr Lumsdon-Taylor left Hadlow College after an award-winning 15-year tenure, for much of which he was finance director.

A group spokesperson said the organisation had appointed an interim chief financial officer to handle some of Mr Lumsdon-Taylor’s day-to-day duties while it looks for a permanent replacement.

This week, the Hadlow Group announced its chief executive, Mr Hannan, had gone on sick leave.

A college spokesperson said: “Governors are working proactively with the FE Commissioner and ESFA.

“The outcomes from the current commissioner visits are still ongoing and not yet finalised, and, as such, we cannot comment further at this time.

“The board can confirm the group principal and CEO is on leave due to ill health. In his absence, the board is in the process of putting in place interim senior leadership arrangements.

“The board will provide further information as soon as it’s in a position to do so.” 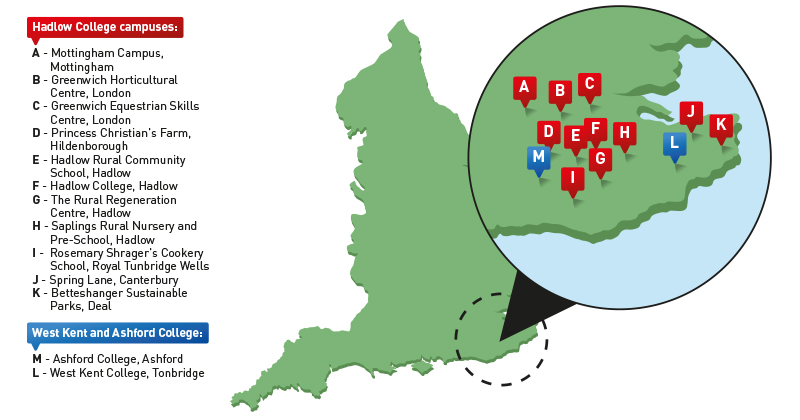 The ESFA claw-back remains unresolved and the Hadlow Group has been granted an extension to submit its 2017/18 accounts by the end of February.

On Thursday 7 February, the FE commissioner visited WKAC and is likely to visit Hadlow College today.

A DfE spokesperson said: “The ESFA and the FE commissioner are working closely with the governing bodies of Hadlow College and West Kent and Ashford College.

“As part of this, the FE commissioner and his team are visiting the colleges.”

Although they are both part of the same group, Hadlow College and WKAC are not merged and, therefore, file separate financial accounts and operate separate boards.

Hadlow College adopted WKAC from K College, which collapsed in 2014, despite the government spending around £40 million trying to keep it afloat, and formed the Hadlow Group.

The 2017 Kent and Medway area review of colleges, led by FE commissioner Richard Atkins, recommended WKAC and Hadlow College merge, but both boards rejected the recommendation, according to minutes from March 2018.

However, the WKAC board did agree to take a meeting with the Transition Unit to see if there would be any financial support if they decided to merge. 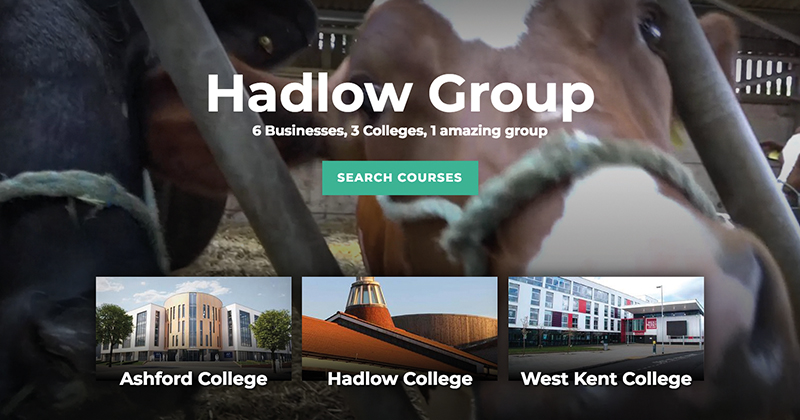 It is believed the ESFA questioned why the group needed support funds for the merger, considering the Hadlow Group had already benefited from transitional support.

On closer inspection of the management accounts for 2017/18, related-party transactions between the colleges are now at the centre of the FE commissioner’s enquiries.

When asked about the crisis engulfing the Hadlow Group, a DfE spokesperson said: “We do not routinely comment on ongoing investigations.”

The close relationship between Mark Lumsdon-Taylor and Paul Hannan, the two men at the top of the Hadlow Group, was on full display in a Kent Life interview and intimate photoshoot published last June.

Marking Hadlow College’s 50th anniversary, the pair were interviewed about “the land-based college’s journey from zero to hero”.

According to Kent Life: “Fifteen years on and the two men, both from the north-east but very different personalities, are still working side by side, united by their passion for the empire they have created, and a solid friendship underpinned by mutual respect. 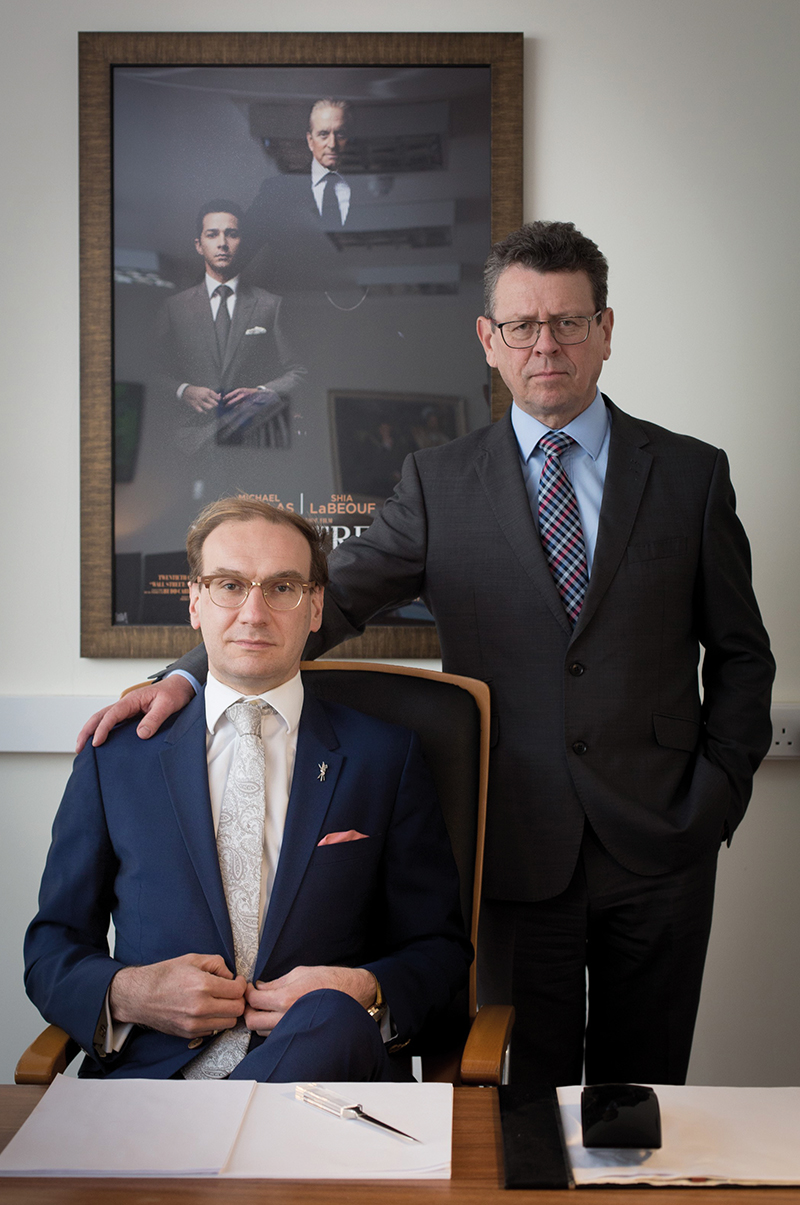 “They even live opposite one another on campus and joke with each other with the ease of long-standing mates and neighbours.”

But it is Mark who does all the talking, very much the face of the college group, several people close to the duo have told FE Week.

Mark describes how, in 2002, Hadlow College was one of his clients when he was director of audit at chartered accountants MHA MacIntyre Hudson in London.

He says it was Paul’s “inimitable charm” that persuaded him to join the college to help “sort it out”.

Mark tells the magazine: “I’ve always been the City boy, very corporate in my outlook, and what I knew about rural in 2002 you could write on a postage stamp and still have space!”

After joining as a short-term ‘trouble-shooter’ he was “formally appointed to the Senior Management Team in 2003 with responsibility for finance, commercial and global operations”, and, in 2004, became corporative transformation officer and group director of finance and resources.

Mark went on to become the deputy principal and chief executive for the group following the creation of West Kent and Ashford College in 2014.

In the interview, he describes Paul as “a family man, a teacher by training and … a brilliant individual with no airs and graces.

“He says it as it is and has an approach that is very engaging, whereas mine is slightly more corporate, more business focused. Together we make a really good team.

“Paul has also drummed into me over the last 14 years that the most important thing is our students – who we refer to us as our clients and treat with the utmost respect – and he’s right.”

Mark continues: “And we do have a bit of a giggle on occasions [the photoshoot takes ages, they’re laughing so much] while making core commitments that we’ve never swerved away from, like the investment in horticulture and agriculture. They are our two pillars and fundamental to the business moving forward. It’s governor ratified that we would always focus on those twin pillars. You never sell your silver.”