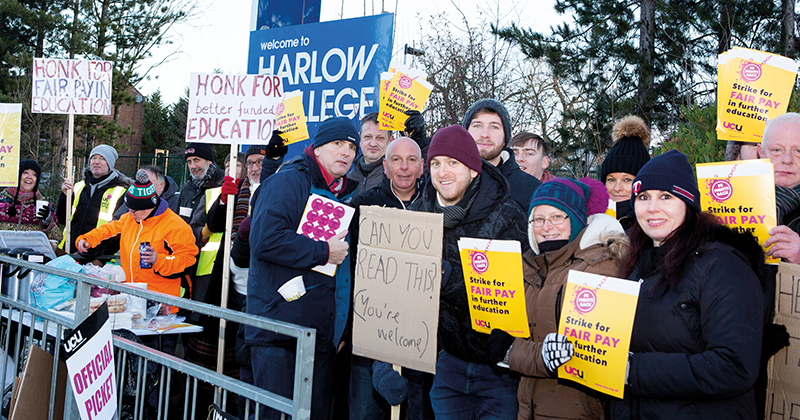 Strikes went ahead at 13 colleges but were suspended at three others this week in an ongoing dispute over pay.

Members of the University and College Union from across England walked out for two days from Tuesday, but action was called off at Hugh Baird College in Liverpool, New College Swindon and Coventry College after management agreed to reopen staff pay talks.

“Staff have been out in force this week on picket lines across England, in freezing conditions, standing up for their jobs and fighting for fair pay,” said UCU head of policy Matt Waddup.

“Colleges must stop shirking their responsibility to their staff. If they want to avoid further disruption then they need to come back to the negotiating table with serious deals.

“We hope this latest wave of action will focus the minds of those in charge at the colleges that are refusing to put their staff first.”

Staff are demanding a five per cent pay increase, and are angry over the Association of Colleges’ offer in July of just a one per cent rise plus a “substantial pay package” over two years, dependent on government funding.

According to the UCU, FE teachers are paid £7,000 less than their contemporaries in schools.

The fight for better pay was backed by several MPs this week, including Feltham and Heston’s Seema Malhotra and Brentford and Isleworth MP Ruth Cadbury, both of whom have visited the West Thames College picket line.

“Cuts to further education funding are having a devastating impact on colleges, staff and students,” said Ms Malhotra.

“I fully support the efforts of UCU members at West Thames College in their fight for fair pay.”

Ms Cadbury said the government’s “heartless austerity programme” was behind the fall in staff wages.

After staff at her local college voted to strike, Oxford West and Abingdon MP Layla Moran said: “It is outrageous hardworking staff at Abingdon and Witney College have been left feeling they have no option but to strike in response to pay cuts.

“This government has decimated college funding, leaving staff pay trailing way behind their counterparts in schools.”

Strike action at Hugh Baird was suspended at the last minute, after governors requested more time to ratify a “landmark” pay deal.

Their staff are asking for a salary rise of between three and six per cent over the next two years, as well as an extra five days’ annual leave for 2018/19.

Governors promised to meet on 8 February to approve the deal, and if both the union and college are happy following this then the dispute will be resolved.

UCU regional official for Hugh Baird College Martyn Moss said: “We are pleased that today’s talks have left us in a position where we can suspend this week’s strikes.

“We hope to continue the negotiations in good faith and also take scheduled action in March off the table.”

Staff at Coventry College also suspended strikes after their leadership team agreed to further talks with the UCU.

Action was also called off at New College Swindon following a “breakthrough” in pay talks.

A three-day strike at the college is still planned 20 March and will take place if “sufficient progress cannot be made in resolving the outstanding issues”, the UCU said.