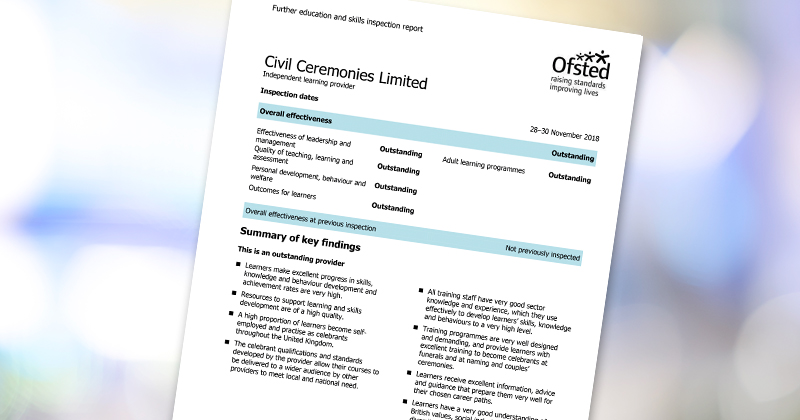 A loans-only provider has been rated ‘outstanding’ – the first such provider to receive the highest possible rating from Ofsted.

Civil Ceremonies Limited, which offers level three courses in funeral, naming and couples’ celebrancy entirely funded by advanced learner loans, was rated grade one across the board in a report published this morning.

It follows an investigation by FE Week in November which found that 80 per cent of the loans-only providers inspected by Ofsted to date were less than ‘good’, while none had been rated ‘outstanding’ at the time.

Today’s report said that leaders and managers at Kettering-based Civil Ceremonies Ltd were “highly successful in implementing their vision and mission for the business”.

The provider was founded in 2002 and began directly delivering loans-funded provision in 2016 after a period subcontracting for a local college. According to Education and Skills Funding Agency figures it has a 2018/19 allocation of £331,444.

In addition to its loans-funded provision, delivered through a combination of distance learning and residential courses, Civil Ceremonies has also developed its own qualifications “which allow their courses to be delivered to a wider audience by other providers to meet local and national need”, the report said.

Its training programmes are “very well designed and demanding” and “provide learners with excellent training to become celebrants”, while training staff have “very good sector knowledge and experience” and “exceptionally high expectations of their learners”.

Current learners, of whom there were 75 at the time of inspection, “are all on track to achieve and make excellent progress”, and a “high proportion” go on to “become self-employed and practise as celebrants”.

“We may only be a small team but this ‘outstanding’ mark demonstrates how we can compete at the highest level on the quality of our training,” she said.

Loans-only providers only came into scope for inspection by Ofsted from September 2016 – even though some providers had been delivering since late 2013.

ESFA figures show there are 49 providers whose only form of adult skills funding is loans allocations, worth a combined total of almost £18 million, in 2018/19.

FE Week’s investigation at the end of November found just 20 of these loans-only providers had been inspected, eight of which had received an ‘inadequate’ grade and a further eight were rated ‘requires improvement’.

But despite these statistics, the education watchdog would not say whether it was planning to up its monitoring of this kind of provider, prompting demands for urgent action.

Advanced learner loans, originally known as 24+ loans, were introduced in 2013/14 for learners studying courses at levels three or four and aged 24 and older.

Following a series of scandals in 2017, reported by FE Week, involving loans-funded providers that went bust leaving learners in the lurch, the ESFA introduced tighter controls on providers wanting to access loans funding.