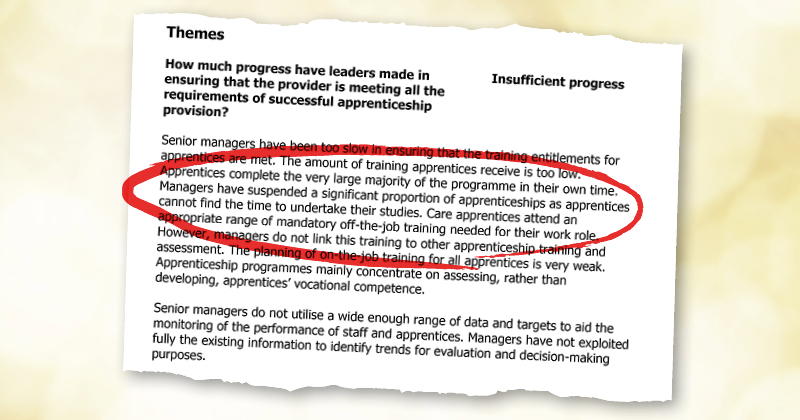 A care sector apprenticeship provider has been heavily criticised by Ofsted for failing to give its apprentices any off-the-job training.

Premier Nursing Agency Limited was found to be making ‘insufficient progress’ in two out of three themes under review in an early monitoring report published today.

The damning report comes just two and a half weeks after a provider delivering apprenticeships to the civil service was slammed for exactly the same reason – leading to Premier People Solutions losing its contract.

Apprentices following care worker standards with Premier Nursing Agency Limited “complete the very large majority of the programme in their own time” and “receive no formal off-the-job training other than the mandatory training needed to work in the sector”, according to today’s report.

“Managers have suspended a significant proportion of apprenticeships as apprentices cannot find the time to undertake their studies,” the report said.

Inspectors found that “assessors meet with apprentices once a month to help them gather the evidence needed to complete their apprenticeship”.

These “arrangements impede care apprentices’ progress” and often “lead to postponements in training or extension to their programmes’ duration”.

Furthermore, many care apprentices “have already worked in the care sector for a significant time prior to programme enrolment” and therefore “the programme only consolidates existing vocational competence” rather than enabling apprentices to “developing new skills, knowledge and behaviours”.

Premier Nursing Agency Limited has been approached for a comment.

According to the Ofsted report the provider, which also offers at-home care services, was founded in 2016 and began delivering levy-funded apprenticeships in August 2017.

At the time of the visit it had 46 apprentices on level two and three care standards, and a further six on business administration frameworks.

According to Education and Skills Funding Agency guidance, it is now likely to be barred from taking on new apprentices.

Premier People Solutions Limited, which trades as Premier Partnerships and is unrelated to Premier Nursing Agency Limited, had its contract to deliver apprenticeship training to government departments terminated in mid-November.

Its Ofsted report, published November 15, found the government departments – including Department for Work and Pensions, HM Revenue and Customs and the UK Visas and Immigration service – were failing to release apprentices for the off-the-job training they are entitled to, and often refusing them permission to attend training.

It said: “Too many apprentices fail to attend training sessions. Apprentices are aware of their entitlement and they attempt to gain their line manager’s support to attend.