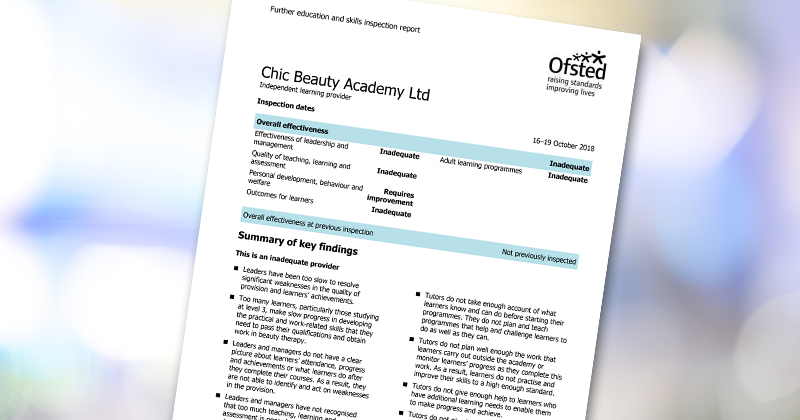 Ofsted has slammed an ‘inadequate’ private provider for its “misleading” careers advice, in a damning report published today.

Chic Beauty Academy, which offers advanced learner loans-funded provision and level two adult education courses, was rated grade four overall and in four headlines fields – although the provider has disputed many of the education watchdog’s findings, and said it will be challenging the verdict.

It found that learners at Chic Beauty Academy  “receive insufficiently comprehensive and sometimes misleading advice and guidance about how the choices they make about courses will help them to achieve their career goals”.

The provider, which offers courses in beauty therapy massage, nail technology and make-up to around 400 learners in the last year, according to the Ofsted report, has an AEB allocation of £455,501 and £996,140 for advanced learner loans in 2018/19, according to ESFA figures.

“Learners do not have access to impartial careers advice before they enrol on courses through the academy’s call centre,” the Ofsted report said.

Inspectors found that leaders had failed to “collect sufficient information about learners’ next steps into further training or employment in the beauty therapy industry” to ensure that the “programmes that they offer meet learners’ career aspirations”.

Nor had they “consulted sufficiently” with employers to ensure that the courses provided learners with the “skills and qualifications to gain employment where they live” or to “meet local needs”.

The provider was also criticised for having “advised inappropriately” a few learners who were “entitled to receive free or subsidised training” to take out loans instead.

Among their recommendations, inspectors urged the provider to “improve the quality of pre-course information, advice and guidance so that learners can make well-informed choices about the appropriateness of the programmes they are considering before they take out an advanced learner loan or enrol with the academy”.

However, Safeen Ali, Chic Beauty Academy’s director, said there were a number of “incorrect, untrue points” in the report and that she was challenging it.

She said the provider has Matrix accreditation, meaning it has met recognised standards in information, advice and guidance – which it would not have got “if our IAG was poor”.

She said learners were given advice at enrolment stage, and again at induction, which included information “about their course, and where they wish to go with their course and their career”.

Chic Beauty also runs “a session in the course on careers advice” but Ms Ali claimed “that wasn’t factored in” by inspectors.

She also denied that it had ill-advised learners to take out loans.

Learners aged 19 to 23 who were eligible for free training, through the first level three entitlement, but had taken out loans instead were on courses that were “not on the eligibility list for the AEB”, and Chic Beauty had agreed with the ESFA that those affected learners were “going to waive their right for free training”.

Ms Ali said she had yet to be told by the funding agency if it was going to terminate Chic Beauty’s contract.

It found some subjects, namely arts and media, “stand out” as areas where there is a “mismatch between the numbers of students taking courses and their future employment in the industry”.

“Some students get a bit deflated and lose that momentum they built when they discover it is an impossible dream for most of them,” Ms Spielman said.

Although her comments prompted some pushback from members of the audience, the AoC boss David Hughes said she was “quite right”.

“I think the response from Ofsted is proportionate and quite right,” he said.

“We need to face up to the fact that sometimes we’re not challenging learners enough to make sure they are understanding the courses they go in because it does happen in some places, not everywhere.”