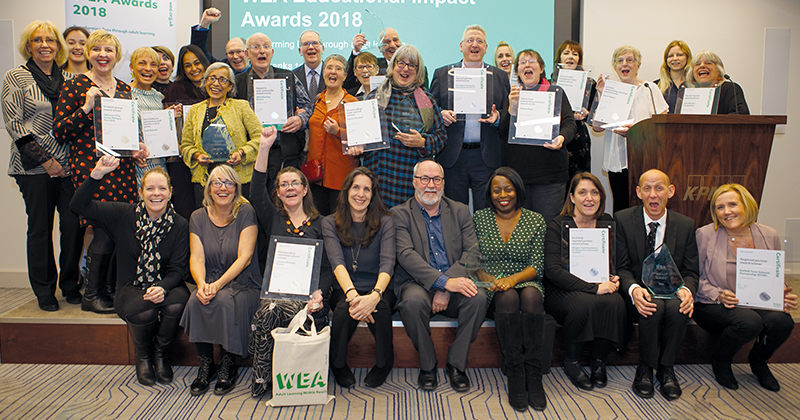 A former boxer who overcame alcohol and substance abuse to get back into the ring as a coach has been crowned outstanding student of the year by the Workers’ Educational Association.

Now in their sixth year, the awards celebrate the people – including learners, tutors and WEA staff – who have transformed their own lives and the lives of those around them through lifelong learning.

These include ex-professional fighter Kevin McCann, from Liverpool, who managed to turn his life around after taking part in the WEA’s Endurance programme specifically for people with addiction problems.

As a result he’s been able to reconnect with his boxing past and is now both a coach and a judge, and he’s also a mentor on the Endurance programme, helping other former addicts.

The judges chose Kevin as the winner because of his “incredible achievements”.

“His story is a powerful example of how one small step into education can lead to a whole world of new opportunities,” they said.

“Kevin has used learning to enhance his life, and he is inspiring others to follow in his footsteps, and for this his award is richly deserved.”

Ruth Spellman, the WEA’s chief executive, offered her “heartfelt congratulations” to Kevin and all the other award-winners and nominees, and said they were “an inspiration to us all”.

“The WEA Awards event is our way of recognising the impact of adult education,” she said.

“Every winner has demonstrated this impact, and it’s our privilege to celebrate their success.”

Other winners include a group of six Syrian refugees who won the award for outstanding student group.

The six men arrived in the UK with their families, unable to speak, read or write English, but thanks to a WEA pre-English for speakers of other languages course, run in partnership with JobCentre Plus, they were able to improve their language skills and gain confidence to support themselves and their families.

The judges said “their story really highlights the power of education and the difference it can make especially to those facing hardship”.

Language barriers were the start of another award-winner’s journey through learning.

Originally from Turkey, she came to the UK unable to speak English – but her efforts to learn were stymied by her immigration status.

Nevertheless she persisted, thanks to the WEA, and Tulay is now a Turkish-language teacher, as well as a language adviser for Ofqual and an examiner for the International Baccalaureate.

The Olive Cordell foundation tutor award went to Maria Crimmins, who teaches ESOL for the WEA in Bradford.

Other award winners include New Routes Integration, a grassroots organisation supporting refugees and asylum-seekers, which won the social impact award.

Sharon “Ronnie” Stuart was named outstanding volunteer of the year, for her work with the WEA’s north east region’s history and heritage branch, while Vivien Vernede, who teaches the schools and parenting pathway in Oxford, won the outstanding tutor award.

The outstanding staff member/team award was shared between two WEA education co-ordinators – Ross Weatherby, in Aberdeen, and Deborah Walsh, in the East Midlands.

A number of regional winners also received awards at the event, while stage and screenwriter Jimmy McGovern and Baroness McGregor-Smith CBE were both named fellows of the WEA for their commitment to the WEA’s ethos.