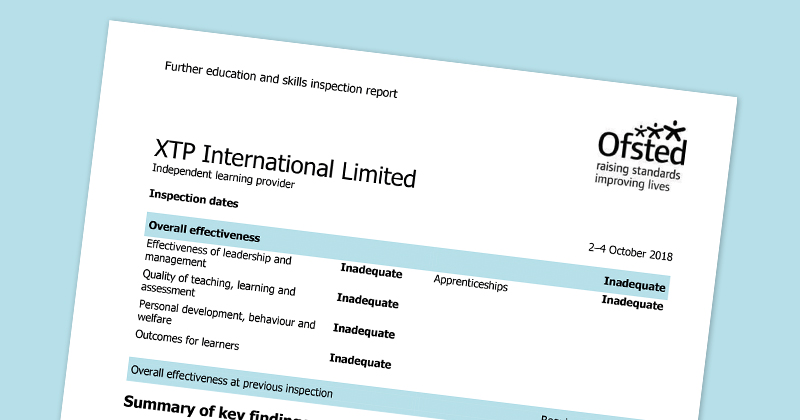 Apprentices at one training provider had not had any training eight months after their start date, according to a damning Ofsted report published today.

XTP International, based in Stockport, was rated ‘inadequate’ across the board by the education watchdog, following an inspection in early October.

Among its many failings, inspectors noted that “there has been a significant decrease” since its last inspection “in the number of apprentices completing their qualification by the planned end date for around two thirds of the programmes”.

Shockingly, they found that “several apprentices have not received any training since they started their apprenticeship more than eight months ago”.

However, Gemma Hughes, XTP’s operations director, claimed it was a question of terminology.

She said the apprentices had been trained, but that Ofsted had been looking at their skills development as a result of that training.

“From an Education and Skills Funding Agency point of view the training has been delivered, but they [Ofsted] don’t think the skills that have been developed have been sufficient,” she told FE Week.

Ms Hughes described the education watchdog’s verdict as “devastating” but didn’t dispute it.

XTP is already in talks with the ESFA about transferring its learners to new providers.

“It is what it is. We can’t change it. We’ve just got to do what’s right for the learners and the employers and make sure that everything is handed over effectively,” she said.

A spokesperson for the Department for Education said it did not “comment on the individual circumstances of providers”.

Under ESFA rules, XTP will now lose its place on the register of apprenticeship training providers.

The provider, which had 68 apprentices on programme at the time of the inspections, runs courses from level 2 to 5 in education and training, customer service, business and administration, management, and manufacturing technologies.

Inspectors said that leaders and managers had “presided over a significant decline in the standard of teaching, learning and assessment since the previous inspection”, which rated it as ‘requires improvement’.

Self-assessment was deemed to be “wholly inaccurate”, while a lack of oversight meant that leaders and managers being “unaware that almost all apprentices make slow or very slow progress”.

Leaders had also failed to “appoint any form of supervisory body to hold them to account for the performance of apprentices and the apprenticeship provision” – despite this being a recommendation at the previous inspection.

“Most” apprentices at the provider “complete their off-the-job learning in their own time, which contravenes apprenticeship requirements”.

“Too often, vocational coaches accredit apprentices with the knowledge and skills they already have,” the report said.

Safeguarding at the provider was also found to be not effective.

Confirmed: Most GCSE and A-level exams pushed back three weeks