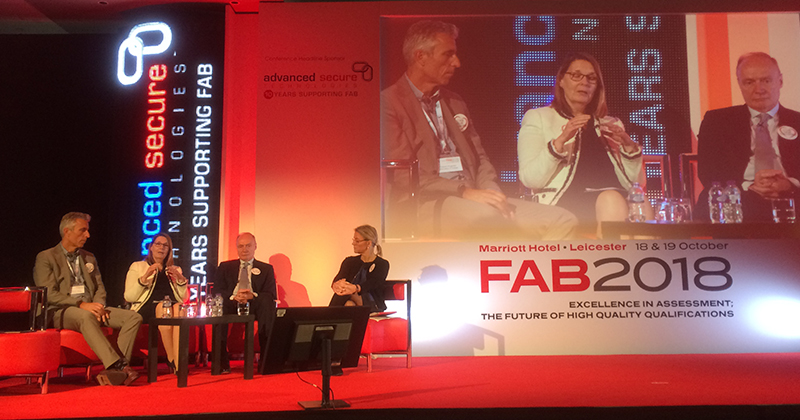 The bosses of the Institute for Apprenticeships and the Education and Skills Funding Agency were in listening mode today, as they acknowledged there were points they needed to “learn from” about apprenticeship assessment.

Sir Gerry Berragan and Eileen Milner’s speeches on the second day of the Federation of Awarding Bodies conference followed a panel discussion in which a number of end-point assessment organisations laid out what was and wasn’t working for them about the process.

Among the issues the panel highlighted were the varying quality of assessment plans and the costs involved, as well as the challenge of finding enough qualified assessors to carry out the assessments.

The panel was “very helpful”, according to Sir Gerry, who said he’d been “taking notes, it’s very valuable feedback – so thank you”.

He said the “conversation this morning has made a point”.

Picking up on one of the points, the IfA chief executive acknowledged that “some of those early assessment plans are not great, because people didn’t really understand what they were doing”.

“Where we see a problem – and FAB have helped us to identify the problems – we’re taking those on and trying to resolve those issues now so those EPAs are fit for purpose for EPA organisations to deliver,” he said.

Sir Gerry said the institute was “learning from those early assessments”.

“We want to continue to improve the delivery and the impact of EPA so some of the feedback that we’ve got today I’ll take back with me,” he said.

The ESFA had a “renewed focus on the crucial element of EPA,” she said.

It is an “unequivocally important part of the reformed apprenticeship landscape,” Ms Milner said, that “should be viewed as a big deal for everyone involved”.

“It’s our collective responsibility to make sure that that big deal works in practice.”

Mr Hasting-Evans stressed the need to “improve the efficiency and effectiveness of our processes” in order to be able to scale up the number of apprentices.

“My concern is if we don’t make some efficiency changes to the way this all works, we will not scale up from about 5 to 10 per cent of apprentices against the target to 100 per cent. We just won’t have enough assessors. The system won’t work,” he said.

This included changes to the system of external quality assurance. NOCN is registered to deliver assessments for 44 different standards, and had already had visits from eight different EQA providers – a process that he described as “repetitive” and “inefficient”.

“It’s the policy that’s wrong, and the way it’s been set out by the department,” he said.

During his speech, Sir Gerry acknowledged that the EQA system was a “priority” and that it was still “a work in progress”.