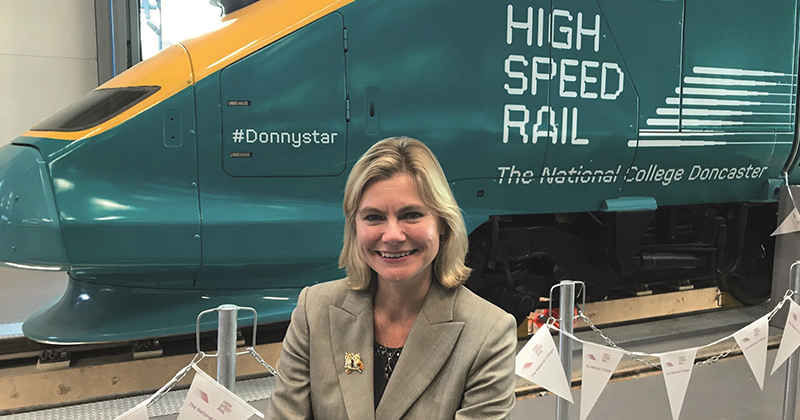 Nearly three years ago the government pledged to create five national colleges that would train more than 20,000 students between them by 2020. Over the weekend one of these, the National College for High Speed Rail, hit the headlines after it emerged it had just 93 learners last year. That prompted FE Week to take a closer look at all the national colleges – uncovering inadequate financial health, special treatment and below-target learner numbers.

Almost a year ago to the day, the National College for High Speed Rail (NCHSR) was opened with great fanfare.

Justine Greening, then education secretary, was all smiles as she cut the ribbon at the college’s Doncaster campus, declaring it a “win-win for everyone”.

But behind the positive front, a funding battle was raging that threatened to derail the college’s very future – and that is still affecting it now.

Although extreme, this isn’t the only case of a national college struggling.

But, as FE Week discovered, none of them will suffer the usual penalties for weak financial performance due to their “unique position” – even though most are in debt and under-recruiting.

Plans for the five colleges were first confirmed in the 2015 spending review, which said they would “train an estimated 21,000 students by 2020 in industries central to the productivity agenda such as digital and high-speed rail”.

The following May, the former Department for Business, Innovation and Skills announced £80 million of government investment for the colleges, of which half would go to the NCHSR.

NCHSR, which has campuses in Birmingham and Doncaster, started in 2017/18, as did the National College for Nuclear, based in two hubs, at Bridgwater and Taunton College and Lakes College.

A fifth, the National College for Onshore Oil and Gas, was supposed to open in the same year, but has yet to get off the ground.

NCCI was in “inadequate” financial health in 2016/17, according to its financial statements.

Minutes from a July board meeting at Ada revealed that it was projected to fall to this financial rating in the current academic year, although this projection was later revised, a spokesperson said.

The minutes acknowledged that “under normal circumstances an ‘inadequate’ financial health rating would result in intervention measures in the sector but it was acknowledged that the national colleges were in a unique position during start-up”.

“This was recognised nationally and had been confirmed by Department for Education officials,” they said.

Furthermore, at least three are in receipt of “working capital loan” funding, described by one college as cash to “ensure liquidity and provide short-term funding during the early years of the college’s operations until learner volumes increase”.

FE Week asked the DfE to confirm this special treatment for the national colleges.

In response, a spokesperson said it was “only right that we work with them during their set-up phase while they establish themselves and work towards financial stability”.

All the colleges were offered working-capital loans “to assist in their start-up costs”, she said.

Despite receiving more than £55 million in capital funding from BIS, local authorities and industry, the NCHSR had just 93 students enrolled in its first year, according to board minutes.

This was less than half the 226 learners it had forecast to have on board, it was acknowledged in its 2016/17 financial statements.

Nonetheless, it still set itself an ambitious target of 639 learners for this September, according to minutes from a board meeting in May: so ambitious that it prompted a team from the Education and Skills Funding Agency to remark that “they had never seen such growth”.

The driver behind this rapid expansion in learner numbers was simple: money.

The college was hit hard by the Institute for Apprenticeships’ decision in 2017 to award the level-four high-speed rail and infrastructure standard a funding cap of £21,000, rather than £27,000 as anticipated and budgeted for by the college.

The standard has seven pathways and represents half of the college’s current provision.

Minutes from an October 2017 board meeting, just days after Ms Greening’s visit, reveal that the college “would not be viable” at that level of funding, “as for every £1,000 below the level of the higher band it would lose £1 million over five years”.

“The college’s costs had been built based on the quality of its provision that could not be delivered if the funding band was £21,000,” the minutes said.

Despite attempting to enlist the support of Ms Greening to fight their cause, and an appeal by the employer group that developed the standard, the IfA’s decision stood.

According to the college’s 2016/17 financial statements, the impact of this on the college’s income “will be significant over the medium to long term”.

College leaders met with officials from the Department for Education, Department for Transport and HS2 in December to discuss the college’s financial situation, according to board minutes from that month.

“It was clear the departments will not let the college fail, and that they will develop a package to support it,” the minutes said.

Earlier this year the college was forced to renegotiate repayments on a loan it had taken out from HS2, worth millions.

Minutes from a May board meeting show the college to be in discussions with the DfE about further support, although this was contingent on the college “being seen to help itself”.

This included a suggestion that the college “broaden its scope” as it was “underselling itself by restricting its remit to high-speed rail”.

Of the 14 courses the college currently offers, nine are focused on high-speed rail. The remainder are in management or rail engineering, and it has plans to introduce five new courses – including one in train driving.

“Recognising the transferability of the skills gained at the college and how they can be applied in transport and infrastructure is key to matching the aspirations of our learners and businesses that come to the college, and is a focus of our ongoing discussions with DfE and our wider network of industry partners,” said Martin Owen, the college’s commercial finance director.

“We are proud of what we have achieved in launching the world’s first dedicated high-speed rail college,” he added.

No further funding support for the college has been agreed at this time, confirmed the DfE.

An IfA spokesperson said: “The Institute strives to make recommendations that support high-quality training whilst delivering value for money for employers and government.”

Ada received £18.2 million from the London local-enterprise partnership’s further education capital fund, and £13.4 million from the government, and had 56 students when it opened in September 2016.

Those numbers are now up to 130 learners in its sixth form, and 125 apprentices working for companies including Google, Siemens and Deloitte, a spokesperson told FE Week.

She admitted that its enrolment was lower than forecast, but said the college had been forced to “constrain our numbers” as the larger premises it was due to move into this year were not yet ready.

The college is also under considerable financial strain.

Minutes from meetings in February and May reveal concerns from board members about its reliance on fundraising to cover core costs, with question raised over “whether Ada will ever break even purely with government funding”. 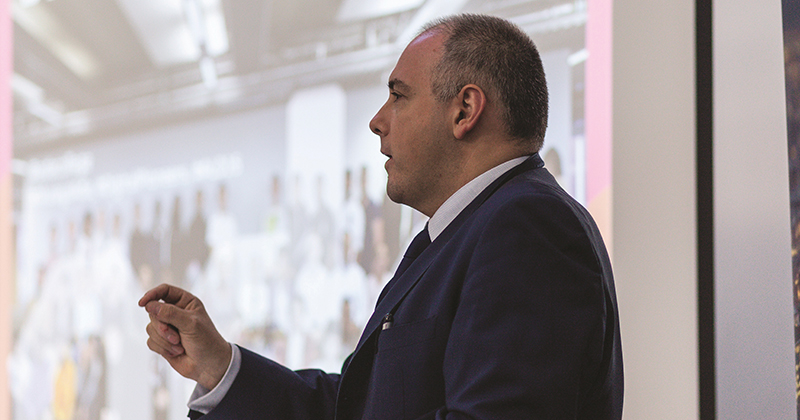 Robert Halfon at the launch of Ada in October 2016

Its 2016/17 financial statements show that it received £140,000 in working-capital-loan funding from the Department for Education that year, with a further £280,000 expected in 2017/18 – although its financial health was “satisfactory”.

The cash was to “ensure liquidity and provide short-term funding during the early years of the college’s operations until learner volumes increase”, according to the accounts.

Board minutes from February indicate that the college was in discussions with the DfE about “whether we can delay the repayments” on this loan.

An Ada spokesperson said the college was on track to break even in 2018/19, and go into surplus next year.

“Breaking even within three years of operation exceeds expectations,” she said.

Fundraising was essential to enable the college to “go beyond what is possible in many education environments”, she added, and referred to “the high levels of industry support” it received.

She said the college was “doing really well. We have had some fantastic successes and are incredibly proud of what we’re achieving here”.

The NCCI was allocated £5.5 million from the public purse and opened at the same time as Ada with just 16 students.

Perhaps unsurprisingly, it had already fallen into ‘‘inadequate” fiscal health in 2016/17, according to its financial statements.

They show it had an operating deficit of £165,020 for the year, and were forecasting further deficits over the following three years.

But as it had revised down its initial student forecasts “because of the risks associated with the original recruitment profile”, the college was therefore “seeking to renegotiate the repayment terms”.

An NCCI spokesperson said that the college’s original plans had been “out of kilter” with the needs of industry and the “start-up nature” of the college.

Its revised plans “more closely align to the needs of the industry for higher level work-based training” and had led to its level-two classroom-based provision being scrapped, she said.

It currently has 27 learners and 59 apprentices enrolled – although the spokesperson insisted it was “confident it was on track to recruit over 450” students altogether in 2018/19.

Achieving this would be represent a “four-fold increase on the previous year”, she said.

The National College for Nuclear has a different set-up from the other existing national colleges, in that it isn’t a college in its own right.

The DfE provided £15 million to cover the cost of new buildings and equipment, while the Heart of the South West local-enterprise partnership contributed a further £3 million to the southern hub, and Bridgwater and Taunton put in £4.5 million.

A spokesperson said the college was “pleased with our start-up progress in a challenging environment for education and skills”.

The National College for Onshore Oil and Gas (NCOOG) was allocated £5.6 million in 2016 by BIS, along with equipment donations from industry.

It was set to open in September 2017, but has yet to materialise.

Martin York, the college’s managing director, said the onshore oil and gas industry – otherwise known as fracking – was in development and as yet was still “identifying its future workforce requirements”.

“NCOOG will launch and develop in partnership with industry,” he said.

“When NCOOG is confident of the industry’s requirements, delivery of the colleges funding and support package will be progressed; until we reach this stage I am pleased to confirm that NCOOG does not require or is seeking any third-party funding.”

A DfE spokesperson confirmed that development of the college had been paused.