EuroSkills Budapest got off to a breathtaking start tonight as a Hungarian theatre group that will be familiar to the British public mesmerised spectators to officially open the competition.

Thousands packed inside the Papp László Budapest Sport arena for this year’s opener, which was live streamed around the world and featured a speech from the Hungarian prime minister Viktor Orbán.

Kicking off the night was Attraction Shadow Theatre, a group who rose to fame during a performance at the Hungary Olympic oath ceremony for the London 2012 Olympics before winning Britain’s Got Talent in 2013. 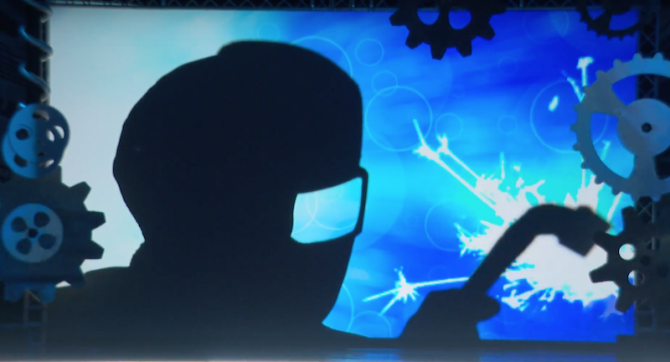 The did a rendition of many of the skills that will be on show over the next three days (click here to watch the performance).

Following the performances were three heartfelt speeches from László Parragh, President of the Hungarian Chamber of Commerce and Industry, Dita Traidas, President of WorldSkills Europe, and Mr Orbán.

The Hungarian prime minister told the EuroSkills competitors they were “part of a greater challenge”.

“Europe faces a serious competitive disadvantage and the only way to overcome it is by training the best skills workers of the world,” he said.

“Start working and kickstart your country – fight for it and lift it high.”

Following the speeches was the parade of nations where each of the 28 competing countries took to the stage in their team waving their flag (see image above). Team UK’s flag-bearer was floristry competitor Elizabeth Newcombe.

The competitor and expert oaths were then read to officially declare the EuroSkills 2018 competition open.

Finishing the night was a performance from Hungarian pop band Irie Maffia.

FE Week spoke with WorldSkills UK chief executive Dr Neil Bentley after the show to hear his thoughts on the spectacle and what is in store for the competitors over the next few days.

“It was an amazing platform to see young people from across the whole of Europe getting ready to compete for something that is going to change their lives,” he said.

“Favourite part of the night was seeing Team UK take to the stage, absolutely amazing. They waited a long time to get up there but seeing the union jack up there in its finest was just brilliant.

“It is game on now. Best of luck to Team UK and everyone else but especially our team. It is going to be an intense competition. We’ve seen the competition space today and it is really brilliant and I know that Team UK is going to do us proud.”

We caught up with @DrNeilB after the #EuroSkillsBudapest opening ceremony. Here’s what he thought of it and his take on what’s coming up in the next few days #TeamUK pic.twitter.com/pM9vslmEo0

The competitions at EuroSkills Budapest will open to the public in the Hungexpo at 10Aam tomorrow (September 26) and conclude on Friday, where 80,000 people are expected to attend.

Send your message of good luck to the team using the #TeamUK hashtag on Twitter.