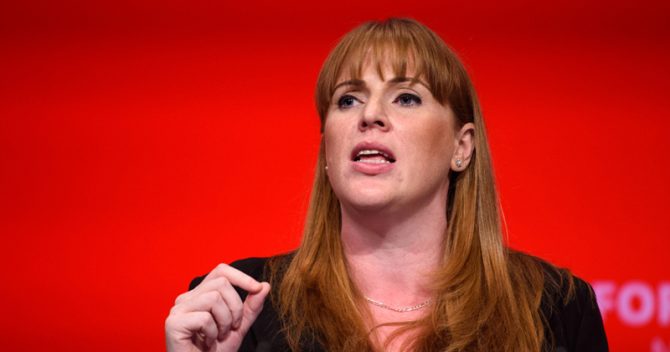 Labour has done little to shine a light on the party’s plans for FE policy as the shadow education minister stopped short of going into any details on the subject during her speech at the party’s conference.

The hotly awaited address from Angela Rayner did not include any new policy announcements about FE and skills, or any details about existing policies.

Although Ms Rayner did speak about the formation of a commission for lifelong learning, this was first suggested in the party’s 2017 election manifesto which said the commission would be part of the National Education Service and “tasked with integrating further and higher education”.

However, no further details were provided today on what this would entail or how it would be funded.

At the party conference in Liverpool, Ms Rayner said: “I know from my own life that sometimes people need a second chance later in life. So we’ll provide not just free higher education but free further education.

“And we’ll ask experts from across the field to join our lifelong learning commission, led by our shadow minister Gordon Marsden. Because we’re not afraid to hear from experts. In fact, we welcome it.”

Elsewhere in her speech, she also accused the Conservative government of giving the country “a million fewer adult learners.”

(before checking against delivery)

“Conference, we’re at our best when we work together.

“That is what we did when we stopped the Tories in their tracks last year. Just look at their manifesto. If you can find a library they haven’t closed, you’ll find it under ‘political fiction’.

“And if you read now what they claimed they’d do then, you’ll find more self-serving delusion than Donald Trump’s twitter feed.

“Since then, our opposition under Jeremy Corbyn has lit a bonfire of the vanity projects.

“The Tories are in retreat on every issue from free schools to free school meals, which were saved by the campaigning of so many in this room and outside it.

“Just last week, we forced them to give up a plan to spend 20 million pounds on taxis to chauffeur a few hundred individual pupils up to thirty miles a day to get to their nearest grammar school. All while cutting transport for disabled children to get to their local school. And what did they do with the money? Not reinvest it, but return it to the Treasury!

“This when they have broken promise after promise to properly fund our schools. If there was an Ofsted for politics, the Tories would fail their inspection and be forced to convert to a Labour government.

“And I’ll tell you what that Labour government will do.

“Our National Education Service will not only reverse the cuts but tackle the inefficiency of the Tories’ school system and take power from corporations and hand it to communities.

“We’ll start by immediately ending the Tories’ academy and free schools programmes. They neither improve standards nor empower staff or parents. Instead, they’ve been shut out and cut out by Tory ministers in Whitehall.

“Like the schools minister in the Lords, who has his own academy chain but won’t say how he deals with the conflict of interest. An unelected minister, literally refusing to be transparent about his own transparency policy.

“If only he was as accountable to us as he wants teachers to be to him.

“And it’s the same for our councils. The Tories talk about devolution. But they want to hand down the blame, not the budget. Councillors are left responsible for school places but without the power to create them.

“So we will allow them to build schools, create new places and take back control of admissions from academy trusts.

“We’ll also tackle the problem of trusts that fail, leaving schools stranded outside the system. Imagine being in an organisation facing a crisis but with no leadership or direction. You’d think Tory ministers would know the feeling.

“Yet that’s what they’ve inflicted on an ever increasing number of schools. So we’ll allow academies to return to local authority control. We’ll end the scandal of individuals and companies profiting from schools they are involved in, stopping fat cat pay for bosses and restoring fair pay for staff.

“And we will use our time in government to bring all publicly funded schools back into the mainstream public sector, with a common rulebook and under local democratic control.

“On issues like the rising cost of school uniforms, parents have no say, while others profit. The Tories promised to empower people but we know the reality. Not taking back control. But taking it away.

“And where parents and staff want to go further in launching and leading their own schools, our own movement already has an answer: co-operative schools – as part of the local schools family.

“Attacked by the Tories, under Labour they will be part of John McDonnell’s co-operative vision. They will just be one part of the most ambitious school building programme ever, delivered without the waste and inefficiency of free schools and, as we set out in the election, backed by eight billion pounds of investment.

“And let me be clear that if I have anything to do with it, not one brick will be laid by a company that doesn’t pay its taxes or a builder who is falsely self-employed.

“The cost of free market failure is highest in the most important area of schools’ spending. Their staff. Years of real terms pay cuts, rising workloads, and failure to plan the workforce have created a crisis in teacher recruitment and retention.

“The result is that private recruitment agencies rake in over half a billion pounds of taxpayers’ money every year, in fees alone. Our money, spent on profit not pay.

“The Tories talk about public sector waste. Well I’ll tell you, there’s no bigger waste in our education system than this.

“So led by our shadow schools minister Mike Kane, we’ll set out plans for a state funded teacher supply service, fixing the failure of the free market, cutting out the waste and stopping the exploitation of agency workers.

“Too often those who suffer most from staff shortages are children with special educational needs and disabilities. So our National Education Service Charter, the result of thousands of submissions from our members and others, guarantees it will be truly inclusive.

“That is why our shadow children’s minister Emma Lewell-Buck will lead plans to stop those with special educational needs and disabilities from falling out of the school system. And we would back it up with a record investment in modernising school buildings to make sure they are accessible to all who could learn in them.

“Providing an excellent education to the many and not a privileged few.

2And to achieve that, we must start before school. Nowhere is this Conservative government’s failure starker than in the early years, which make the greatest impact on a child’s life. They promised 30 hours high quality free childcare a week.

“But one in seven families now pay more, and nearly one in ten providers risk going bust. Even worse, the very families who need help the most, are least likely to get it. That’s why shadow early years minister Tracy Brabin has led our plans for a new public service, offering free early education for all two to four-year-olds and reinventing our state nurseries.

“A policy as radical as anything proposed by any Labour government in our history.

“But I know from my own life that sometimes people need a second chance later in life. So we’ll provide not just free higher education but free further education.

“And we’ll ask experts from across the field to join our lifelong learning commission, led by our shadow minister Gordon Marsden. Because we’re not afraid to hear from experts. in fact, we welcome it.

“We’ll do the same when we revise assessment and the curriculum. That includes making sure that people know how to use their rights, including joining a trade union, which changed my life.

“Conference, after last year’s election, there were even some Tories who wanted socialism on the curriculum too. They thought that if schools taught young people the history of communism, they wouldn’t vote Labour.

“Conference, we heard earlier today from our shadow chancellor how a Labour government will redistribute wealth, and our National Education Service will play its part.

“Powerless compared to your employer, your landlord, big business and even the welfare system created to support you but which the Tories have turned against you.

“So our National Education Service isn’t just about educating. It’s about empowering. Allowing people to take control over their own lives.

“And that must be what we do in politics too. To make clear to people, as Jeremy [Corbyn] said: you don’t have to take what you’re given.

“And what have the Tories given us?

“A thousand Sure Start centres lost.

“State nurseries fearing for their future.

“Cuts targeted at the very people who need our support the most.

“Conference, in the run up to the next Budget, our task is to lead parents, teachers, trade unions and communities in demanding better. And make clear, we offer better.

“Our National Education Service. In the words of the anthem we’ll sing this week, a banner bright and symbol plain, of human right, and human gain. That is education under a Labour government. A human right, for human gain.

“Conference, we have already changed the political direction of this country. Together we have fought austerity. Now, Conference – let’s end it.”

See our sister paper Schools Week for Labour’s planned reforms to the school system announced at the conference.