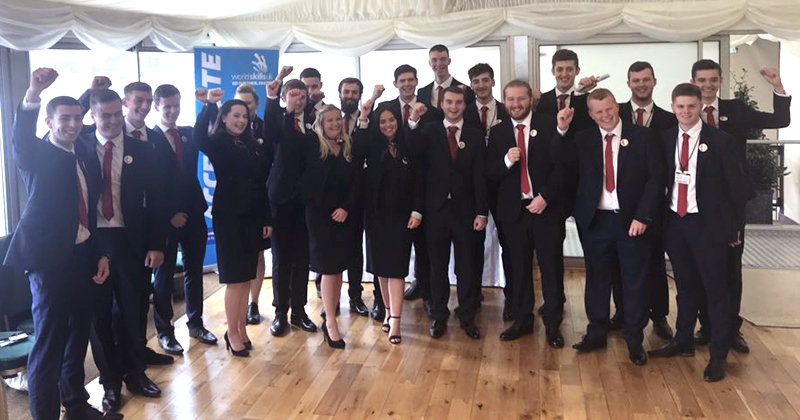 “Endurance, fortitude and determination” are the qualities that each member of Team UK will need to beat Europe’s best, Anne Milton told competitors heading to EuroSkills Budapest at a special send-off event today.

The skills minister was full of enthusiasm when addressing the 22 gifted young tradespeople who are flying out to Hungary in less than three weeks’ time to compete in a broad spectrum of disciplines including mechanical engineering, beauty therapy, web design and cooking.

She told them that they “are the future” as life today is “no longer about what you know it is about what skills you have got as well”.

“You will be going out to Budapest representing your country and doing us proud.”

The minister said that going to the WorldSkills Abu Dhabi competition last year was “probably the most mind-blowing experience of my life” and offered this new round of competitors some advice.

“Don’t let anything get in your way,” she said.

“Never forget what you have already achieved, you are the best but you now have to compete against the rest.

“Don’t feel you are under any kind of pressure because of Brexit, don’t like thoughts like these get in your head that will stop you from doing your very best.

“If you believe you can do and believe you deserve it then you will achieve what you set out to achieve.”

Speaking to FE Week after she added: “It is going to take endurance, fortitude and determination to show the rest of Europe what they can do. Good luck to them all.”

Twenty-seven other countries will compete in EuroSkills Budapest in over 30 different disciplines. Around 80,000 spectators, including European policy-makers, educators and industry experts are expected to attend.

Ms Milton was one of a number of high-profile government officials attending today’s Team UK send-off on the Terrace Pavilion in Parliament. Sir Gerry Berragan, the boss of the Institute for Apprenticeships, was in attendance along with the ESFA’s director of apprenticeships, Keith Smith.

“You just by being here today as competitors have already done a great deal and are already winners,” he told Team UK.

“Whatever happens in EuroSkills remember you are ambassadors for the UK. The stories you have and the sacrifices you’ve made to be here highlight the importance of skills and further education.”

Neil Bentley, chief executive of WorldSkills UK, which organises the country’s skills competitions, added: “In three weeks’ time we will be in Budapest competing against the best of the rest of Europe.

“Today we are here to celebrate the achievements of 22 young women and men, Team UK, who are going to be showing the best of what they can do. They’ve worked so hard to earn their seat on that plane to Hungary.

“You will be facing a new level of competition. Yes you are already the best at what you do in the UK but the challenge now is to up your game as you’ll be competing against 27 other countries.

“You might be feeling nervous but I want to reassure you that we are feeling confident in you and your ability.”

Following the speeches each competitor was issued with a special enamel pin.

Kieran Leyland, Team UK’s heavy truck maintenance competitor, told FE Week that he is “immensely proud” to get to this stage.

“It’s a great opportunity and hopefully I’ll do my best in Budapest,” said the 21-year-old.

“I’m going for gold but obviously I just want to do my best. This is everything for me.”

Holly-Mae Cotterell, Team UK’s beauty therapist competitor, said her training has been “up and down” as she’s had to learn a lot of new treatments in a short period of time but now she’s confident of success.

“Training has been intense but I’ve got my performance together now,” the 19-year-old told FE Week.

“My goals are to do the best I can and beat the previous score that I did at the nationals and if I come back with a medallion of excellence that will be amazing.”

Team UK will fly to Hungary on September 23 in preparation for competitions which will run between September 26 and 28.

FE Week is media partner and will be joining them for the whole week, producing an on location supplement following the closing ceremony.

Keep up with all the action before and during the competition on feweek.co.uk or on Twitter with the handle @FEWeek and the #TeamUK hashtag.