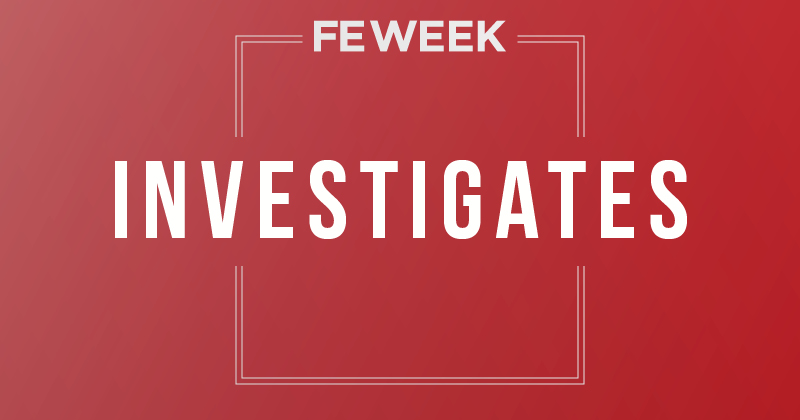 Earlier this month the Institute for Apprenticeships bragged about approving standards at a faster rate than ever before after they signed off their 300th. But since then FE Week has found that over a dozen are being completely ignored by employers. When asked why this was the case, the IfA was tight-lipped and the Department for Education admitted to having no idea – so senior reporter Billy Camden spoke to the trailblazers groups that developed them to find out

Too expensive, complex, and lack of demand were some of the most striking reasons why 13 apprenticeship standards have been available for delivery for over a year but had zero starts.

Among them was the dental laboratory assistant apprenticeship, which has gone a whopping five and half years (see table below) of being snubbed by the employers who developed it.

FE Week’s analysis will surprise many seeing as the DfE changed its rules in recent years to require actual commitment from businesses on trailblazer groups that they will use the standard once approved.

It’s all the more shocking given that at least 10 employers have to be involved in development – so even if a few had second thoughts about the standard, the others would be expected to use it.

When quizzed about why they had ignored the dental assistant standard for so long, private healthcare giant Bupa said it was because other apprenticeships, such as the lab technician, are “more appropriate for our business”.

Integrated Dental Holdings and Oasis Dental Care previously told FE Week they were creating their own dental training schemes, instead of using the already available apprenticeship.

Standards in the aviation industry appear to be proving most unpopular – with three different programmes on the list of 13 with no starts.

“The end-point assessment is more expensive to deliver than allowed for in the current funding band, however, there is also a demand issue,” said Annette Allmark, director of strategic policy at People 1st – the lead trailblazer for the level two airside operator standard with a funding band of £3,000.

“Some of this is due to the type of training and assessment required by the sector due to security and access to aviation airside.”

Meanwhile, the level four aviation operations manager is “very complex”, according to a spokesperson for Heathrow Airport, who said it could only be taught by industry experts with knowledge of specific airport procedures.

“It is therefore imperative that we don’t implement plans, until we have undertaken the training of our own team to ensure trained tutors can deliver the relevant industry expertise,” she added.

The aviation maintenance mechanic and survival equipment fitter standards were both designed specifically for the military.

“The reasoning why these have had no starts to date is both the Royal Navy and Royal Air Force are currently undertaking a strategic, staged approach to, implementing and delivering standards,” explained Alan Moss, head of apprenticeships for the Ministry of Defence.

“We are planning to utilise the survival equipment fitter later this year with the aviation maintenance mechanic following next year.”

Ros Burnley, the director of forestry consultancy firm Adrow Ltd, said it was “no surprise” that take-up of the forest operative standard has been slow because the industry has a low workforce and training costs are “increased” as jobs are all rural.

However, the sector has been “on the front foot in actively promoting it and in this we are seeing some early signs of success,” he claimed.

The old framework for the industry has also not yet been switched off, and the “standard is still ‘new’ which creates some nervousness”, Mr Burnley added.

For the power engineer (degree) apprenticeship, a spokesperson for the National Grid said the electric and gas firm does not have an “immediate business requirement to utilise this standard”.

FE Week understands that some employers in that industry are put off the degree programme because the apprentices will not be fully productive while they’re learning the trade which takes five years.

With regards to the road transport engineering manager apprenticeship, Mark Thornley, head of talent at Arriva UK Bus and Train, said his organisation has so far focused on “embedding” level three standards but will soon move on to “utilising” the level four.

And Mark Gardiner from the Medical Research Centre Harwell said the animal technologist standard has come up against some “obvious hurdles” including employers’ ability to “fund new apprenticeship posts or allocating 20 per cent of the time for current staff to join the scheme”.

It is not a surprise that uptake has been slow

The only review of standards that the IfA has conducted to date is based on funding bands and was launched for 31 apprenticeships in May – which included are some of the most popular.

However, the bespoke tailor and cutter level five apprenticeship is also involved.

While the review is taking place, the trailblazers said they could not discuss why there have been no starts on it yet.

However, FE Week understands that employers have found it too complex, to the point where no one wants to engage with it.

After being shown our analysis, Dr Susan Pember, a former top skills civil servant and director at community learning services membership body Holex, called on the IfA to “remove barriers, and do a stock take of why take up [on the 13 standards] is low”.

“They need to listen to employers, providers and apprentices and make the standards fit for delivery,” she added.

Skills minister Anne Milton said: “We are monitoring the new standards and are working to understand the reasons behind the small number where no starts have yet been recorded.”

The DfE added that it will take action on the unpopular standards where appropriate. 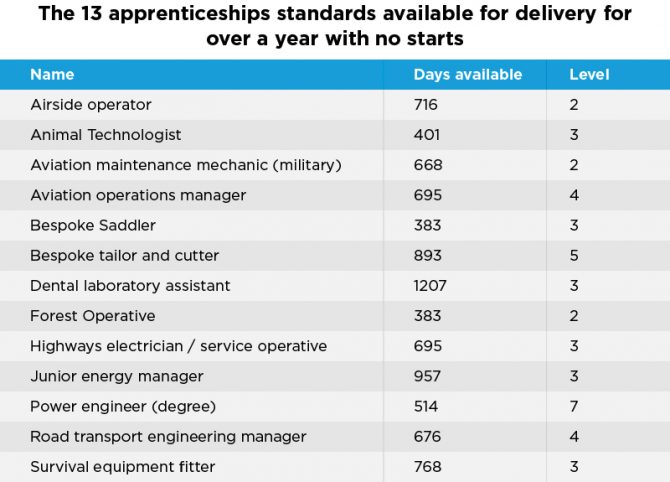