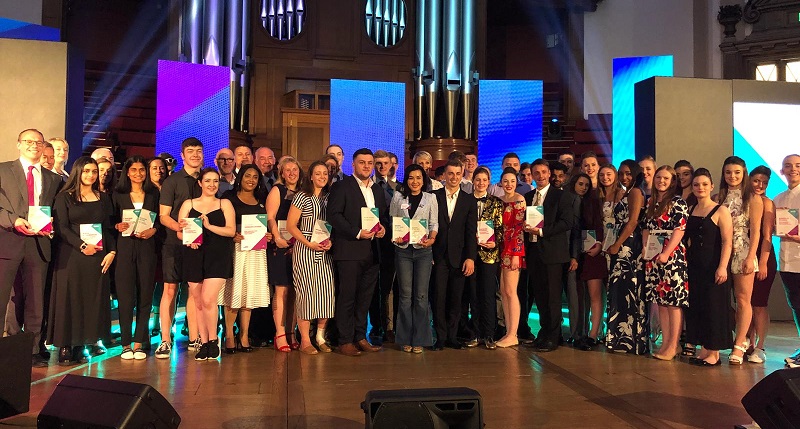 The 24 winners of the 2018 BTEC awards have been recognised at a glitzy ceremony in London.

Central Hall Westminster held the awards where individual learners’ achievements were recognised in a range of subject areas, from construction to music and engineering to sport.

Hosted by TV presenter and well-known FE supporter Steph McGovern, the ceremony showcased the “fantastic contributions” made by students studying for BTECs.

An expert panel of 52 judges considered each nominee for the eighth annual awards, before deciding upon a winner.

Rachna exemplifies the spirit of inspiration and dedication

It was attended by the winners, their families and teachers as well as stakeholders from the education and business worlds. They were joined with entrepreneurs, MPs and celebrities to share the 24 winners’ stories and present them with their awards.

The overall BTEC student of the year award, which comes with a £1,000 prize, went to Rachna Udasi, a level three subsidiary diploma in business student at St David’s College, London.

She launched a business as part of her studies, in which she takes the coffee beans from a community in Africa, ships them across to the UK, packages up and sells to local coffee shops. Profits and proceeds are then sent back to Africa.

“Rachna is a true example of putting her education into practice,” the judges said.

“She has achieved top grades and desires to become a successful entrepreneur and inspire others.

“Rachna exemplifies the spirit of inspiration and dedication.”

Meanwhile, BTEC sports student of the year went to Megan Murphuy, from Bishop Thomas Grant School in London, whose award was presented by double Olympic gold medallist and a former BTEC graduate himself, Max Whitlock.

He gave the audience a treat by showcasing his talent with an impromptu performance on the pommel horse.

Also performing on the day were the five winners of Pearson’s Showstopper Challenge – groups from colleges offering BTECs in the performing arts: Arts1, Pik’n’Mix, Hamilton Mix, Aurimas and Shemaiah.

The award for college of the year went to One Sixth Form College, based in Suffolk, while school of the year was picked up by the Westminster Academy in London.

This is a wonderful celebration, not just of the outstanding winners themselves but of the value of the BTEC qualification

Rod Bristow, President of Pearson in the UK, commended all of the winners.

“I want to offer my congratulations to all of the winners and everyone who was nominated for a BTEC award this year,” he said.

“This is a wonderful celebration, not just of the outstanding winners themselves but of the value of the BTEC qualification to employers and universities around the world.”

Pearson has run BTECs for over 30 years. The hands-on vocational qualifications facilitate training of “work-ready candidates” with knowledge and practical skills desired by employers. Throughout the course, students work on a series of assignments in real-life scenarios.

“Now, more than ever, I believe the broad, career-focused education that BTEC offers reflects the reality that the global economy doesn’t just value what people know; it values what they can do,” he added.

FE Week is media partner for the BTEC awards and will be producing a special supplement on the ceremony next week. 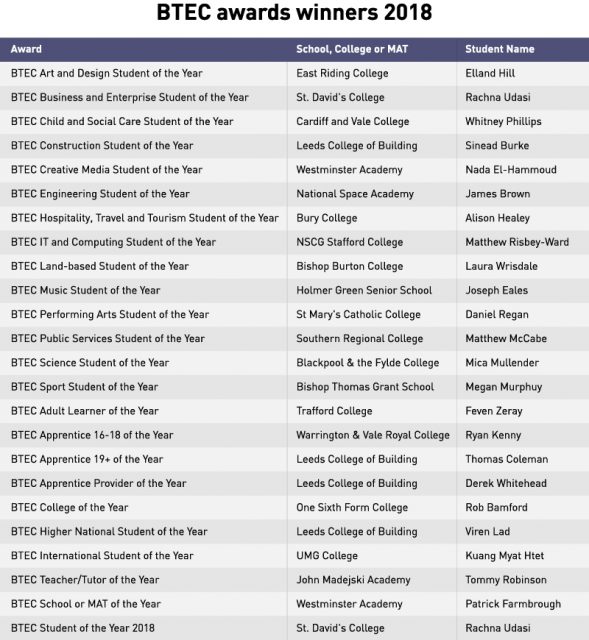