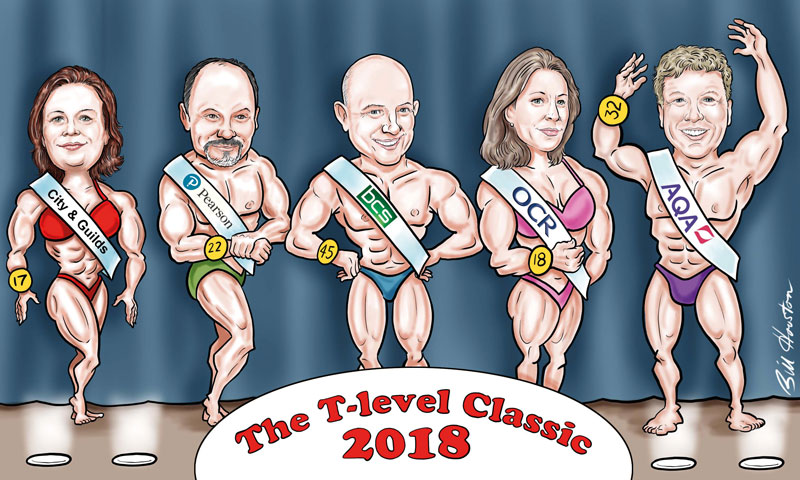 The big guns of the awarding organisation world are drawing the battle lines in the imminent struggle for ownership of the first T-levels.

Despite numerous concerns from across the sector, the government is ploughing ahead with its controversial plan to deploy just one AO per qualification when the first three pathways are launched in 2020.

Leading figures in FE have warned that this procurement phase will be the biggest single test for making sure the first three T-levels are ready in time, and the pressure is on to get it right.

The pathways are: digital (production, design and development), childcare and education, and construction (design, surveying and planning).

FE Week understands that the most hotly contested of the three is digital.

We believe five AO giants – Pearson, City & Guilds, OCR, AQA, and BCS (the chartered institute for IT) – will be in contention for control of the pathway, which relates to the software development technician cluster.

There is already an apprenticeship standard for the cluster at level three, and BCS is its single end-point assessment organisation. Although it is much smaller than the other four, BCS hopes its specialist delivery will give it the edge when procurement kicks off.

City & Guilds is the end-point AO for the software developer standard at level four, and it delivers a level three advanced technical certificate in digital technologies.

Meanwhile, OCR develops computer science qualifications at A-level that include software development – such as the Cambridge technical diploma in IT – while AQA has a level three tech level in IT: programming.

The tender process got underway in May, and will begin with two “market engagement” events on June 11 and 14, in which bidders will hear what an “exclusive license” will involve.

Successful AOs will be responsible for designing the content of the qualification, upskilling providers, providing learning and teaching materials, updating content and assessing qualifications.

Each of the five AOs were asked which of the pathways they are interested in, but they all kept their cards close to their chest, just confirming they would be taking part in the marketing events.

Rod Bristow, the president of Pearson in the UK, and Chris Jones, the chief executive of City & Guilds, have been more outspoken, and voice their concerns in a box-out below this story.

The Department for Education believes that “instead of competition between different AOs leading to better quality and innovation in their design, it can lead to a race to the bottom in which AOs compete to offer qualifications which are easier to pass and therefore of lower value”.

There will be three individual tenders launched in the autumn – one for each of the 2020 pathways.

They will be awarded a licence period of about five years, which the government believes is “appropriate in order to ensure consistency but prevent the risk of complacency”.

The DfE has a year to complete the whole procurement process, but if the history of ESFA tenders is anything to go by, delays can be expected. Procurements for the AEB and non-levy apprenticeships funding, held last year, were both plagued by interruption, leaving providers fuming.

A troubled launch: “Not in the best interests of the learners”

The awarding organisation procurement is the biggest “risk” to ensuring the first three T-levels are rolled out by 2020, the boss of the Association of Colleges has warned.

David Hughes said the proposed timetable is welcomed by colleges who will be “ready and able to deliver”.

However, the risk of delay “lies elsewhere in terms of some of the design of the qualifications and particularly the procurement of the awarding organisations”.

Mr Hughes is not alone in his fears. Two of the biggest AOs in the country believe the process will not be without its speedbumps, particularly because the government has decided to use a single-provider model for each qualification.

“We have raised concerns about plans for awarding organisations bidding for an exclusive licence, which we do not believe to be in the best interests of learners,” said Rod Bristow, president of Pearson in the UK.

“The proposal represents a fundamental shift in the model for delivery which may result in inherent risks and potential unintended, adverse consequences, including a lack of resilience with the significant reliance on the ‘bid winner’, the loss of innovation and expertise, and a lack of choice for providers.”

He was joined in his criticism by City & Guilds chief executive Chris Jones‏ last week, who tweeted: “So despite advice from their own economics advisor over risk of system failure and concerns expressed by the qualifications regulator, @educationgovuk press on with reforms.

“I hope the market engagement helps them see sense and adjust position but I fear it will not.”

Research conducted by Frontier Economics on behalf of the DfE last year concluded that limiting access to a single AO may create a “risk of system failure” both in the short- and long-term.

It warned that if a single AO fails, it may be that no alternative AO can step in.

Ofqual, the body that regulates qualifications in England, has since said it “advised on the risks related to the single-provider model”.

Editor Nick Linford believes that lawyers are the only guarenteed winners from the T-level tender. Read his editorial here.