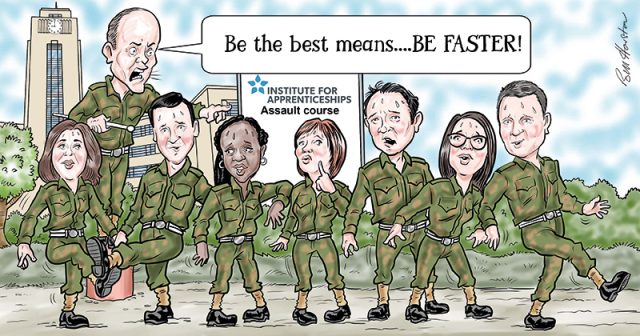 The Institute for Apprenticeships has appointed yet another military person to its leadership team – and they’ve been given the unenviable task of running T-levels.

Carmel Grant OBE, who had been the head of army reform at the Ministry of Defence since January 2016, has taken on the role of deputy director of technical education at the institute.

This makes her the second appointment with military ties under Sir Gerry Berragan, who is a former adjutant general in the army himself.

In April the IfA announced that Robert Nitsch CBE, the army’s director of personnel for the past three years, with whom Sir Gerry had worked with before, would take on the role of chief operating officer.

As deputy director of technical education, Ms Grant will be responsible for leading T-levels, the new post-16 technical qualifications, when the institute takes control from the Department for Education.

Although and exact transfer date has not yet been agreed, it is understood that it will happen before 2019.

Once they’re under her control, Ms Grant will steer the first three T-levels – in digital (production, design and development), childcare and education, and construction (design, surveying and planning) – to a roll-out in 2020.

This will include ensuring awarding organisations meet a tight deadline for designing the content, and working closely with the chosen 52 training providers who will pilot them.

“You will lead the team that will oversee the transition of the overall policy intent of the reforms as well as some of the operational strands,” the job advert for the role said.

“You will also lead the process of developing content for the new T-level programme through the T-level Panels.”

Ms Grant will report to Mr Nitsch and have direct responsibility for up to 20 staff.

Ms Grant, who was named OBE in the Queen’s birthday honours in 2017, is one of several new senior appointees in the IfA’s leadership team.

Peter Schild, a former finance director at HM Revenue & Customs, is becoming its new chief financial officer, and James Matthews, a former strategic development manager at the London Stock Exchange Group and former private secretary to the Cabinet Secretary, is its new chief of staff.

Lucy Rigler has joined as the IfA’s acting deputy director for funding policy.

The team will work under the leadership of Sir Gerry, who was appointed chief executive in November last year, having previously served as a board member since that January.

He revealed in an interview with FE Week in January that he’d been selected without competing directly against any other candidates, and  had been appointed for a two-year period.

Both roles were based in Andover, as were Mr Nitsch’s roles at the time.