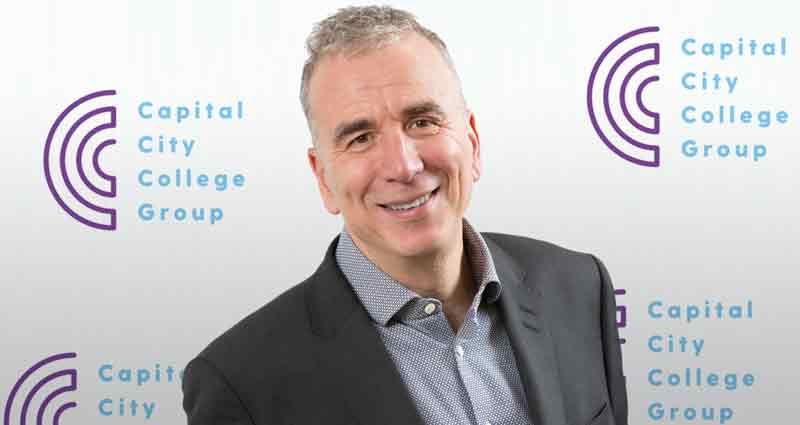 Industrial action at the largest college group in London has come to an end after Capital City College Group offered staff a “modest, non-consolidated payment” and more secure contracts.

University and College Union members at the group’s three campuses – City and Islington College, Westminster Kingsway College, and the College of Haringey, Enfield and North East London – have walked out twice this year after a pay offer of just one per cent.

But Andy Wilson (pictured above), the group chief executive, said today that UCU members at each college have “voted to end the dispute” after they “reached an agreement”.

Pleased @capitalcitycg @ucu members voted to end their dispute. Good to reward colleagues for contribution to merger & offer long-standing substantive hourly-paid more secure contracts. FE staff not paid as much as they deserve but better funding essential to address this fully.

He explained that in addition to the one-per-cent pay increase recommended by the Association of Colleges, CCCG will be making a “modest, non-consolidated payment to all our staff”.

This will be £500 per full-time member of staff, paid on a pro-rata basis to fractional and part-time staff, a spokesperson confirmed.

It has also “committed to consolidate the contracts of hourly-paid staff who have taught half timetables for three years or more into fractional posts,” Mr Wilson said.

“This is something we have wanted to do for a number of years and it is great that the security the large college group now provides allows us to improve the conditions for this important group of staff.”

UCU head of FE, Andrew Harden, said that CCCG has also committed to further pay talks when Mr Wilson leaves and a new chief executive is in post come the next academic year.

He added that members have “made it clear” they will ballot for strike action again if the “promised negotiations over a new local pay bargaining framework does not result in a meaningful pay award for 2018/19”.

London was a hotbed of industrial unrest in March and May as staff at numerous colleges reacted with anger to the AoC’s “disappointing” pay increase recommendation. They claim that because they work and live in the capital, which has higher costs of living than the rest of the UK, they should get a better wage offer.

“CCCG recognises that salaries across the FE sector have not kept up with the costs that our staff have in order to work in London,” Mr Wilson said. “As in other colleges, our income has not increased while staff costs, including pensions, national insurance, the apprenticeship levy as well as salaries, increase every year.

“The corporation aspires to be the best FE employer in the capital and is committed to work with staff and the trade unions to explore a pay policy that will achieve this. In the meantime I am pleased our students will be able to complete their courses without further disruption.”

Mr Harden added: “UCU members took action after being told that there was no extra money available for pay and the issue of fractional contracts was not a priority for the college.

“Members have secured a deal on pay and a decent agreement on fractional contracts. These are a result of the action UCU members took.”