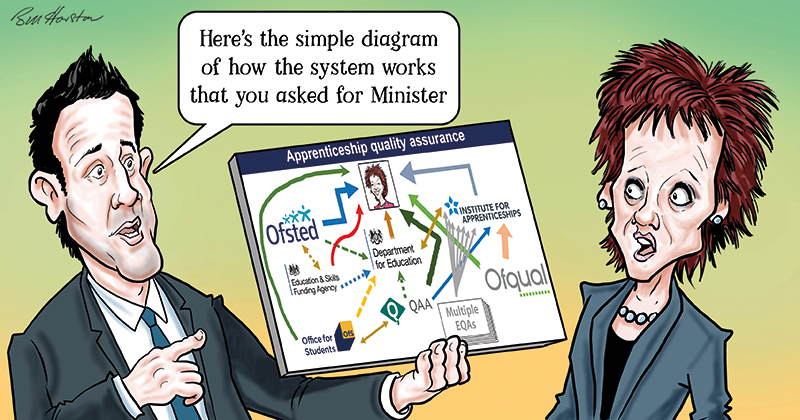 The skills minister has conceded that there is a lack of clarity when it comes to who is accountable for apprenticeship quality.

Anne Milton acknowledged that it was unclear whether it is a job solely for Ofsted or the ESFA at an education committee hearing this morning, admitting responsibility needs to be defined “more clearly”.

MPs asked her and the ESFA’s director of apprenticeships, Keith Smith, on a specific example recently revealed by FE Week, which they said “undermined” the role of inspectorate.

They were referring to Key6 Group, a provider which had its apprenticeship delivery suspended after Ofsted branded its training “not fit for purpose” in the first early monitoring report on newcomers to the apprenticeship market, published in March.

It undermines Ofsted if you carry on with that provider

However, the agency lifted this ban just two months later.

“It undermines Ofsted if you carry on with that provider,” Robert Halfon, chair of the education select committee, told Mr Smith.

The latter defended his agency’s decision, and revealed that Key6 has not been given “unlimited ability” to deliver.

“We review and regularly sit down with the provider,” he explained, adding that an improvement plan has been put in place and he is “confident” that work is “bearing fruit”.

“We have taken the view [to lift the delivery ban] because there was demand from employers, one big levy employer in particular,” he said. “As the employer they took the view that they wanted to do some limited activity with that provider.”

If at any point “we get concerns that improvement isn’t continuing or there are new issues” the ESFA will “take action to impose those sanctions that we actioned before”.

Lucy Powell, the MP for Manchester Central, said this was an “incredibly confused accountability structure” and asked Mr Smith to define who is responsible for determining quality. He could not give a straight answer.

Mr Halfon revisited the point later in the session: “Surely if Ofsted decides a provider is not fit for purpose it should be for Ofsted to decide who is fit for purpose? I don’t understand why the ESFA should come in and say they are fit for purpose.”

Asked about the same thing, Ms Milton admitted that the accountability system for quality is confusing.

“I think that point about clarity is absolutely valid,” she said. “If I can’t explain, I am a simple soul. I’ve got to be able to draw a simple picture, a simple diagram of how the system works, and if it’s got too many arrows on it, that’s not good enough for me. I need to be clear.

“Other people have responsibilities, but I think the relationship between the ESFA and Ofsted over quality is quite difficult to define and I think we need to define that more clearly.”

Their introduction is believed to be a result of growing concerns around the number of untested training providers that had made it onto the register, and which therefore had access to potentially huge sums of public money.

Paul Joyce, Ofsted’s deputy director for FE and skills, said the inspectorate “reserves the right” to carry out another monitoring visit in the case of Key6 considering it is now eligible for funding again.

He added that the watchdog “may well, in light of the monitoring visit report, carry out a full inspection sooner rather than later”.

The DfE has been contacted for comment about Mr Smith’s claims today.