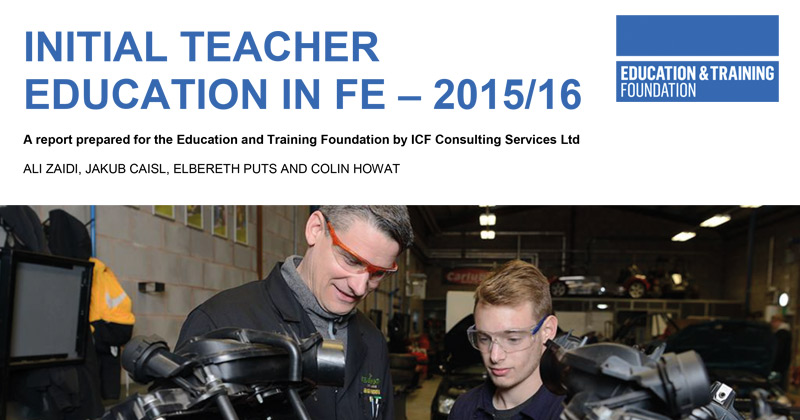 The quality of FE teacher training has continued at an extremely high standard, but falling numbers joining the profession is proving a significant “challenge”, new research has found.

The Education and Training Foundation has today published its fourth annual report examining the provision and take-up of initial teacher education in the FE sector.

It found that all 34 of England’s ITE providers that have had their education and teaching programmes inspected by Ofsted have achieved at least a grade two, and over one in 10 were rated grade one.

Not a single provider was rated ‘requires improvement’ or ‘inadequate’.

The report, undertaken by ICF Consulting Services, stated that these figures have remained “relatively consistent” over the last four years.

However, falling numbers of people training to join the FE profession has continued to be a major cause for concern.

Falling numbers joining the profession continues to be a challenge

ETF’s report stated that the decline in completions was largely due to a decrease in learners studying in colleges.

“In contrast, the number of learners undertaking a PGCE in a HEI dropped only slightly in 2015/16, and has remained relatively stable since 2011/12.”

The report also found that only around 60 per cent of ITE learners progressed to a teaching role in FE, of which 73 per cent gained employment in FE colleges.

It noted that an increasingly high proportion gained employment at independent training providers.

Charlynne Pullen, head of data and evaluation at the ETF, said the report showed there are both “positives” and “challenges” in ITE for FE.

“Given the need to continue on the journey of driving up teaching and training standards in the sector, the fact that the quality of the organisations bringing future generations into the profession is high is a clear positive for the sector,” she said.

“The coming introduction of T-levels means we need a high-quality workforce to make sure they are a success. The gradually falling numbers joining the profession continues to be a challenge, but providing this data allows the whole sector to clearly identify and address both current and future trends and changes.”

Ms Pullen added that this ITE report is a “key part” of the ETF’s spring series of “impartial and independent research”, ensuring that “practitioners, providers and policy makers have access to high-quality and reliable data to support their decision-making”.