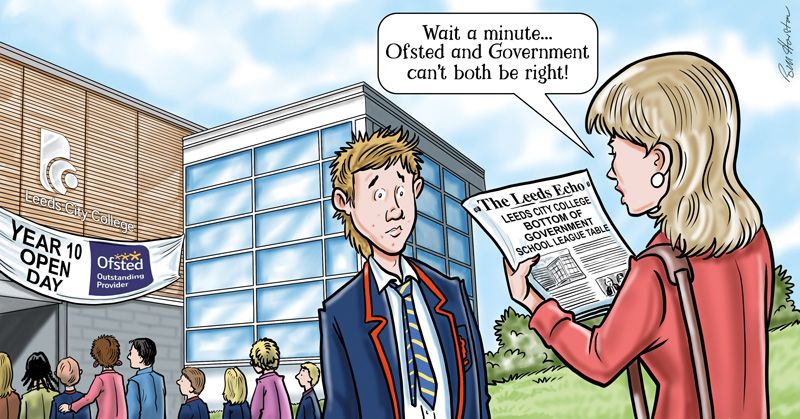 The credibility of a major new government progress measure is a stake after a college labelled as one of the worst in the country for teaching 14- to 16-year-olds has been rated ‘outstanding’ for its provision by Ofsted.

The watchdog couldn’t praise Leeds City College highly enough for its “direct entry” provision in a report published on March 16.

Students make “excellent progress from their starting point” – even though many are from “very challenging backgrounds that are characterised by an episodic experience of education”.

And now, voices from across the sector are redoubling their efforts to get colleges and other providers exempted from the government’s flagship Progress 8 measure – which they say is unrepresentative of the work their do with children in the 14-to-16 bracket.

The measure looks at the progress a pupil has made between the end of primary school and the results of eight GCSEs, comparing their achievement with other students of similar ability.

The Association of Colleges say it is unfair to publish colleges’ results next to those of schools. FE providers only recruit their key stage 4 students in year 10, and thus only have responsibility over their learners for two of the five years that Progress 8 measures.

Direct entry at colleges also mostly caters for young people who have not thrived in a mainstream school setting.

The latest Progress 8 data set, published in January, showed that the 17 colleges which offered direct entry last year scored -2.10 on average, well below the government’s floor standard of -0.5, and by far the lowest of any type of educational institution.

The national media subsequently ran stories listing “the worst schools in the country”, in which colleges such as Leeds City – which received a score of -2.02 – were included.

“We do not dispute its value to students in schools,” Lewis Freer, the head of the 14+ apprenticeship academy at Leeds City College, told FE Week.

“However, for those who require a more bespoke approach, such a measure fails to capture the real development these young people need.”

He added that while league tables “may not recognise the positive impact we make, it is reassuring to know that Ofsted certainly does”.

The college was rated ‘good’ overall but ‘outstanding’ in three headline fields, including for its direct entry provision.

Inspectors found that every one of its 172 full-time 14- to 16-year-old students, who have a “record of low prior attainment and poor attendance”, made “excellent progress” onto further education and training.

“Students follow an engaging curriculum that meets the statutory requirements for key stage 4, combining the study of core GCSE subjects alongside vocational qualifications,” the report states.

Inspectors added that staff are “highly qualified and experienced” to deliver the range of qualifications they offer.

They provide “intensive and effective levels of pastoral support to students, some of whom are from very challenging backgrounds that are characterised by an episodic experience of education”.

Mr Freer said that by keeping class sizes down and “focusing on the individual needs” of learners “we are better able to identify and overcome the many barriers to learning these young people experience” at school.

Progress 8 was established by the Department for Education in 2016.

Schools are judged against the measure every year, and are considered to be below the floor standard if their pupils’ average score in a complex points system comes in at -0.5 or under in eight GCSEs.

FE Week revealed in February that two huge colleges – London South East and NCG – have ditched their own 14-to-16 provision because they say the “unfair” measure is too damaging to their reputation.