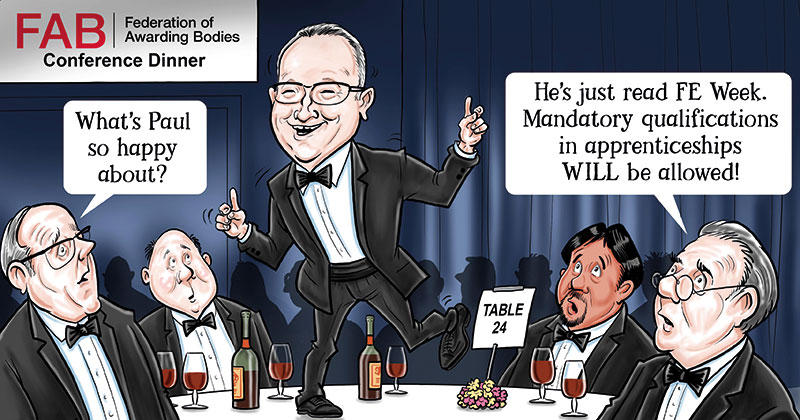 A major U-turn that should allow mandatory technical qualifications to be included in new apprenticeships had been widely welcomed by the sector.

The change was announced at a special Institute for Apprenticeships briefing event, days after it was exclusively revealed on the front page of the previous FE Week.

“I think we’ve recognised that where a qualification doesn’t do damage to end-point assessment, and doesn’t duplicate it, but is a good thing and adds value to it, then we don’t have a problem with it,” said Richard Guy, the IfA’s deputy director for quality.

Employer groups can submit proposals for approval under the new rules – which will apply to both existing and new standards – from the April 11 application window, the IfA confirmed.

“Common sense prevails and the value of qualifications to apprentices is finally recognised,” tweeted Paul Eeles, the chair of the Federation of Awarding Bodies. “The apprenticeship reforms finally make sense for both employer and learner.”

“I hope this represents the start of a fundamental shift in attitude at the IfA now that we have Sir Gerry Berragan at the helm, where new apprenticeship standards really are employer-led,” said Graham Hastings-Evans, managing director of awarding body NOCN.

Sir Gerry was appointed as the new chief executive of the IfA last November, and wasted no time in making it “faster and better”.

John Hyde, executive chairman at HIT Training, said adding mandatory qualifications to the new hospitality apprenticeships would give “confidence to learners and their parents considering a career in this industry”.

“City & Guilds or BTEC are much stronger brand images than a government apprenticeship certificate signed by current minister,” he added.

Kirstie Donnelly, the City & Guilds managing director, acknowledged that “you would expect us to be pleased at this latest U-turn”, but she warned that “it seems to go against any streamlining of the system that the government is trying to introduce”.

And Rod Bristow, president of Pearson UK – which sells BTECs – said that including qualifications in apprenticeships was “an important way to recognise the achievements of the learner”.

Strict rules limiting the use of qualifications in standards have frustrated the sector for years.

Previously, the criteria only permitted a mandatory qualification in an apprenticeship where it was a regulatory requirement, required by a professional body.

It otherwise applied if a qualification was such a “must-have in the labour market that an apprentice would be disadvantaged in job applications without it”.

The guidance now allows for an “off-the-job technical qualification that does not accredit full occupational competence and would either add breadth to the apprenticeship or provide structure for the off-the-job training”.

The blanket ban on allowing employer groups to submit a standard for approval that includes a qualification still in development – introduced last summer – has also been lifted.

Another newly announced change related to the timing of funding-band recommendations, which aims to “shorten the time a standard spends waiting for approval for delivery”.

The Institute’s “faster and better” programme also aims to simplify aspects of the development process by “changing” some of the policy criteria for approving apprenticeship occupations and standards.

The skills minister Anne Milton recently admitted that “some oil on the wheels” was needed.

“We have listened and responded to what trailblazer groups have been telling us since the Institute’s launch last April: that the apprenticeships standards development process needs to be faster and better,” said Sir Gerry.

“These improvements should address these concerns.”