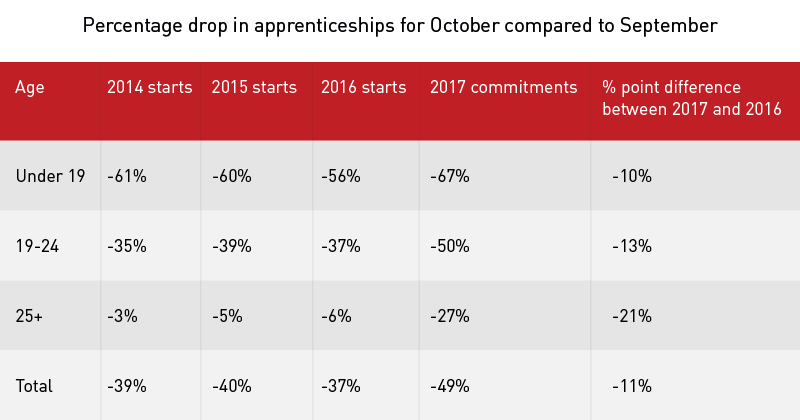 There is no sign of the major upturn in levied apprenticeships that the government has been praying for, according to the latest statistics.

There were 13,910 commitments made through the apprenticeship service in October, down from 27,130 the previous month, the Department for Education has said.

A fall-back is normal after the September surge – but at 49 per cent it is a much bigger drop by proportion than in any of the past three years, which have seen an average die-back of around 39 per cent.

These figures suggest the government will have to wait even longer for an upturn in apprenticeship numbers, which have been in freefall since the introduction of the levy in May.

Figures for the final quarter of 2016/17, from May to July, were down 59 per cent relative to the same time the previous year, according to the November statistical first release.

But Justine Greening told an education select committee hearing in October that the government had been “expecting” this fall in numbers, on the basis that employers would “take some time to look at how they wanted to invest” their levy money.

Others in the sector have attributed this fall-off to different causes, however.

These include changes to apprenticeship rules which mean apprentices must do a minimum of 20 per cent off-the-job training – a rule that the AELP insists is a barrier for many employers who can’t afford a “non-productive” apprentice for the equivalent of one day a week.

Companies not subject to the levy also now have to pay 10 per cent of the cost of apprenticeship training for the first time, another circumstance widely held to have contributed to the collapse in starts.

The government’s first attempt at a non-levy procurement exercise had to be scrapped in June, after it was “markedly oversubscribed”.

Providers are still waiting to hear the results of a second tender, launched in July, which are now two weeks overdue.

That exercise descended into farce just days before the September deadline, as the Education and Skills Funding Agency issued multiple confusing clarifications to its complex tender rules and requirements.

This means it’s not possible to directly compare these figures to previous years, which include starts for all employers.

However, by looking at the percentage drop from September to October – which has remained relatively static until now – we can get more accurate picture of the current position relative to previous years.

There has been no indication of an upsurge in the number of employers signed up to use the apprenticeship service.

Just 600 employers registered an account in October, the same number as the previous month – which was already at its lowest since February.

There are now 11,800 employers with levy accounts, which represents around 61 per cent of all the companies the DfE estimates are eligible to pay the levy.

Apprenticeships and skills minister Anne Milton said in October she was “flabbergasted” to find that many large employers were unaware of the levy, even though they were paying it.

A DfE spokesperson told FE Week in November that feedback the department had received from employers has shown they were “taking their time to plan ahead and maximise the opportunities the apprenticeship levy can bring” and “they plan to increase their demand for apprenticeships”.