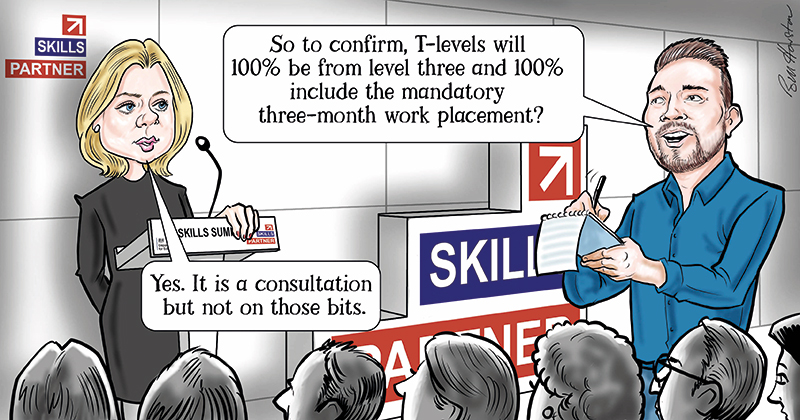 The education secretary has ruled out T-levels at level two and will not budge on mandatory three-month work placements, no matter what emerges from a new public consultation.

Justine Greening used her speech at the Skills Summit in London on Thursday to unveil the long-awaited T-levels consultation, urging businesses and training providers to share their views on how the new “gold standard” qualifications should be designed for the “skills revolution”.

The much-anticipated consultation, which has been delayed for over a year, has been launched in the midst of mounting concern and confusion regarding the government’s current design of T-levels, which are due to be taken on a limited basis from 2020.

The sector has been up in arms about how viable it will be for every T-level to include a mandatory 45-day minimum work placement. Senior figures in FE are worried that young people in rural areas will lose access to many subjects, and are dubious that thousands of businesses can be persuaded to join in.

It has also been unclear whether T-levels would strictly be level three – which is equivalent to A-level – and above qualifications.

Ms Greening, however, was absolutely clear when she discussed the qualifications with FE Week: T-levels will not be at level two and the mandatory work placement is here to stay.

“We are consulting, but we expect T-levels to be at level three, and we do expect a three-month work placement that is high-quality to be mandatory,” she insisted, before taking an even stronger stance.

“When I say we need to bite the bullet and make this work, because in the past it hasn’t, it is because of these sorts of compromises that shouldn’t be made,” she said.

“So no, I’m afraid it has to require proper on-the-job training. That is something that absolutely has to take place.”

The consultation will ascertain where “we put level four and five to make sure there is a ladder beyond T-levels for people to progress on to”.

When pressed by FE Week to confirm for certain that T-levels will start from level three and three-month work placements will stay mandatory, no matter what comes out of the consultation, Ms Greening said: “Yes. It is a consultation but not on those bits.”

The Association of Colleges has been lobbying to overturn the government’s stance on the work placement.

Its boss David Hughes used an interview with FE Week last month to plead with the Department for Education not to “punish” young people by making it mandatory, but it appears his wishes have gone unheard.

Responding to Ms Greening’s comments, he restated his disappointment.

“As I’ve said before, forcing everyone into a work placement means you limit people’s choices to what they can attend on a local basis,” he said.

“Through our response to the consultation, we will be asking for the DfE to look closer at this and how we can make it work better for all young people in every labour market.”

The AELP has previously urged the government not to forget level two qualifications during the reforms to technical education, insisting they are vital to social mobility.

Although Ms Greening ruled out T-levels beneath level three, the consultation has left the door open for a new qualification at level two as a standalone achievement, whether it’s via an apprenticeship or in the classroom.

“This welcome consultation gives us the opportunity to say that there should be a formal level two qualification with its own recognition however it is packaged,” said AELP’s boss Mark Dawe.

He insisted that the government must “stand firm” on the amount of work experience.

The T-levels consultation will run for 10 weeks, closing on February 8, 2018. Click here to go to the consultation page.