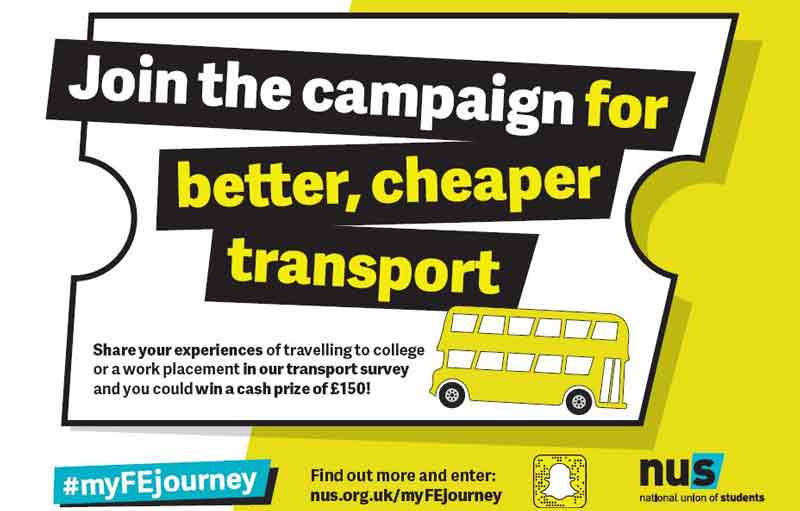 The ‘My FE Journey’ campaign is also asking learners to share their experiences of the struggles they face reaching their provider, particularly concerning cost or poor services, and organisers are urging union branches to meet with senior leadership and transport companies to lobby for change.

The NUS vice-president for further education, Emily Chapman, described transport as a “huge problem” for students and apprentices that presents “a significant barrier to education”.

“Students suffer from poor, unreliable services on public transport and most receive no financial support,” she said.

“Our FE Journey campaign will lobby for subsidised or free travel for post-16 learners and apprentices ensuring everybody can access and succeed in education, and transport to and from their place of learning is no longer a barrier.”

Apprentice’s travel costs have been on everyone’s lips recently.

In a draft version of the Labour manifesto, leaked in May to our sister paper Schools Week, the party was planning to cover the cost of apprentice travel.

It estimated that apprentice travel costs an average of £24 a week, around a quarter of what those on the minimum wage will earn, a figure taken from the National Society of Apprentices, part of the NUS.

Shadow skills minister Gordon Marsden said the party would cover transport for 16-to-19 starts, at a cost of around £99 million, after he committed in March to funding apprenticeship travel at FE Week’s Annual Apprenticeship Conference.

However, the pledge was left out of the final version of the manifesto, and the party refused to comment on the leaked version.

The Conservatives also committed to cutting travel costs for apprentices in their manifesto with “significantly discounted bus and train travel” to encourage more young people from disadvantaged backgrounds to take up the qualifications.

However, FE Week reported at the start of November that there has been no evidence so far that these discounts have been implemented in the wake of the election in June.

A spokesperson for the Department of Transport said the government was still “exploring options” and would set out plans “in due course”.

The NUS has been collecting the views of students through its ‘FE Unplugged’ campaign for the past two years, the issue of transport costs and quality crops up repeatedly around the country.

According to the NUS, the union at Mid Kent College successfully won extra bus services, better subsidies and improved transport services after petitioning the local council and inviting local politicians and transport providers to speak to students at the college.

Learners can fill in a survey online to share their transport experiences, and have the chance of winning £150.