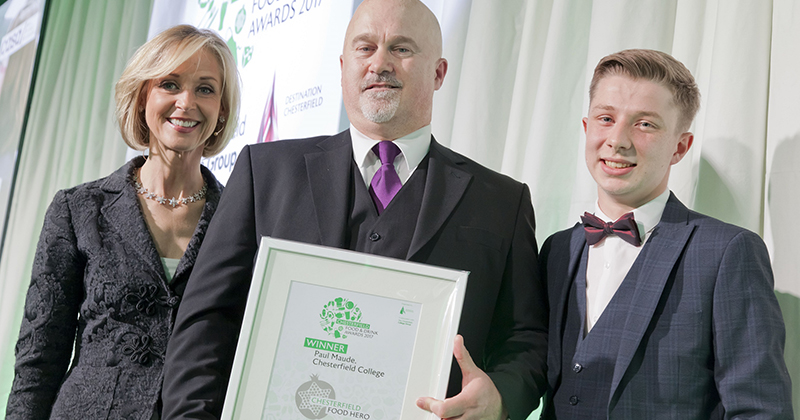 A member of staff from Chesterfield College has been hailed as a hero at the fifth annual Chesterfield Food and Drink Awards.

Paul Maude, the college’s hospitality and catering career pathway leader, was presented the ‘food hero’ award by a former student, for his dedication both to the hospitality industry and his learners, organising work placements for them at venues like Wembley Stadium and Jamie Oliver’s restaurants.

Mr Maude, who himself studied at Chesterfield College and helps organise catering for the awards, once made a hazelnut meringue for Princess Diana, and has served food to guests including Joan Collins and fashion designer Zandra Rhodes.

“I love what I do and it is an honour to have received the award,” he said, “definitely a highlight in my career.”

The Food and Drink awards were set up to recognise the best of catering and hospitality in Chesterfield, including categories such as ‘best pub of the year’, ‘the family friendly award’, ‘best customer service’ and ‘young chef of the year’.