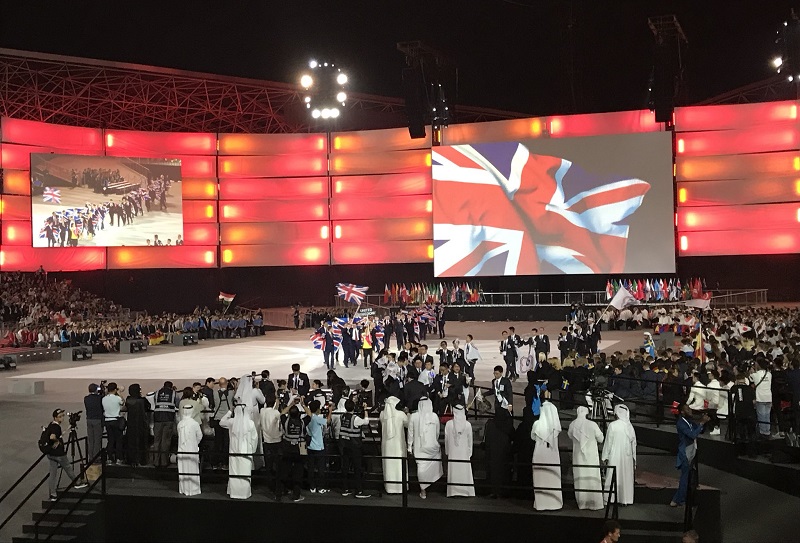 The best of British took centre stage with the world watching tonight as Abu Dhabi put on a spectacular opening ceremony to officially open the 44th WorldSkills.

Around 10,000 people packed inside the du Arena on Yas Island for this year’s competition opener, which was live streamed around the globe and featured authentic Arabic dance performances and a 60-piece orchestra.

But it was a breathtaking display by the gymnastic troupe Spelbound, who rose to fame in the TV Show Britain’s Got Talent, that stole the show.

The act was tonight’s finale and had the audience on the edge of their seats throughout the risky routine.

It followed a centre piece performance based on a theme of ‘Progress through Skills’, which featured live dancers who portrayed the role skills have had in the development of the UAE, and after the traditional Parade of Nations.

“It was truly an outstanding opening to the competition,” Peter Lauener, chief executive of the ESFA and the UK’s Official Delegate for WorldSkills, told FE Week after the ceremony.

“To see so many UK supporters out here, friends, family and of course the WorldSkills UK experts & team, was heart-warming. The atmosphere they created when the team walked through the arena waving our flag was really something.”

He added: “To see a British act [spellbound] be the pinnacle of the evening made me even more proud of our nation and our education system.

“Tonight’s opening ceremony reflected on the importance of technical and vocational skills. Team UK are a fantastic example of the worldclass talent we have in our country.

“I wish all of the team the best of luck over the coming four days.”

The opening ceremony started at around 19:45pm after a slight delay due to the sheer volume of spectators attempting to enter the arena.

To kick proceedings off the UAE national anthem was played to a standing audience, and was followed by music and dance performances featuring a 60-piece orchestra and 100-member choir, made up of local and international residents of the UAE.

The Parade of Nations then got the crowd even more pumped as all 1,300 competitors from the 59 competing countries waved their flags across the stage.

“Hosting WorldSkills Abu Dhabi 2017 is an honour and an important moment for the UAE”, said His Excellency Mubarak al-Shamsi, the Director General of ACTVET. “Vocational skills present huge opportunities for young people in this country, and WorldSkills Abu Dhabi 2017 is the perfect way for us to introduce these prospects to tens of thousands of young UAE nationals.”

President of WorldSkills, Simon Bartley, took to the stage at the end and thanked the Crown Prince of Abu Dhabi and the other leaders of the UAE for hosting WorldSkills in the Middle East for the first time.

“Their vision acknowledges that to transform and develop an economy you have to put skills at the very heart of your efforts,” he said.

The competitions at WorldSkills Abu Dhabi will open to the public in the Abu Dhabi National Exhibition Centre at 10Aam tomorrow (October 15), where 100,000 people are expected to attend including 80,000 school children, and 10,000 international visitors.

Send your message of good luck to the team using the #TeamUK and our ‘Go Team UK’ social media image. (click here to download). Also include the official event hashtag #WS_AbuDhabi.

FE Week are proud to be the official media partners for Team UK and WorldSkills UK.