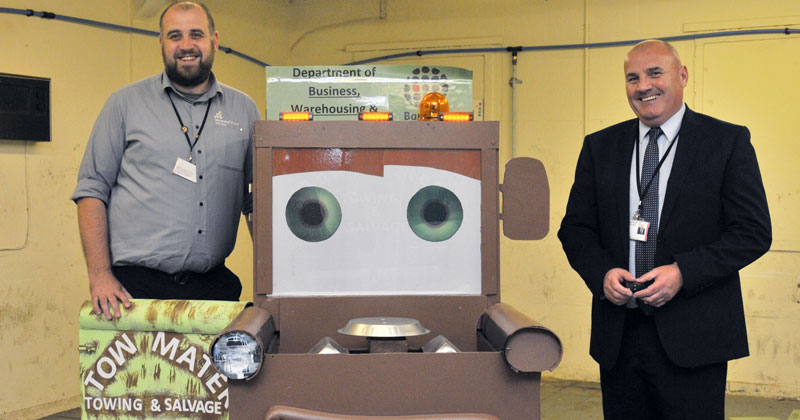 The reigning champions of an annual charity soapbox derby will attempt to defend their title this week.

Barnsley College, won the ‘most creative cart’ award at last year’s Bluebell Woods soapbox derby in Rotherham with their Fireman Sam-themed car, and their new entry is based on the character of Tow Mater from the Pixar film Cars.

The college is hoping to win one of the three prizes available, ‘most creative cart’, ‘best dressed entry’ or ‘the highest amount raised’, and will compete against 39 other carts in a race through Clifton Park in Rotherham.

The cart was made by Steve Willmer (pictured right), a tutorial learning mentor in the college’s business, warehousing and logistics department and will be driven by staff members Garry Lyon (left), Kerry Alexander and Joanne Potter.

The soapbox derby is a fundraising event organised by Bluebell Wood Children’s Hospice, which cares for children and young adults with life-shortening and life-threatening conditions.

Last year, the college raised over £750 for the hospice.

“We’re extremely proud to be a part of this event and fundraising for an amazing charity that will hopefully make a difference,” said Mr Willmer.