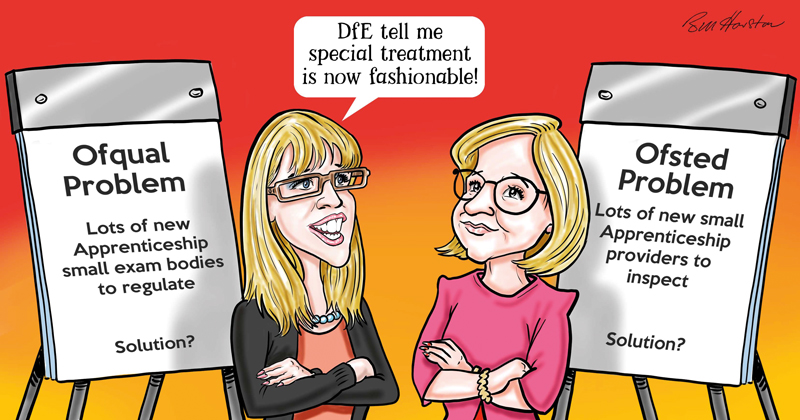 New apprenticeship exam bodies are next in line for special treatment, after Ofqual hinted that it’s considering a lighter regulatory touch for those that fall under its remit.

But established awarding organisations groaning under the weight of increased regulation have begun to complain about double standards.

The exams regulator is about to take charge of numerous organisations newly approved to deliver end-point assessments (EPA) for the new apprenticeship standards that it quality assures.

The EPA organisations will have to apply for Ofqual recognition, but the watchdog said it would be “working with the ESFA to explore how to reduce any unnecessary burden.”

Ofqual has so far been asked to provide external quality assurance for 62 apprenticeship standards – 26 of which it will also regulate, with a further 36 are under review.

One apprenticeship standard quality assured by Ofqual is team leader at level three.

Of the 18 bodies already approved to deliver its final exams, five aren’t yet recognised by the exams watchdog.

There are dozens more end-point assessment organisations which aren’t established exam boards in the pipeline, including large firms like BT, meaning Ofqual is likely to be swamped with new responsibilities.

As a result it is mooting special treatment for new EPA organisations, in sharp contrast to the situation faced by exam bodies it already regulates, which in certain circumstances will fall under the responsibility of two quality assurers for the same standard.

Ofqual has said it will regulate an EPA if it “falls within a regulated awarding organisation’s scope of recognition”, regardless of who the EQA provider is.

The leader of one awarding organisation, who asked not to be named, claimed Ofqual had asked to see his EPA specification and assessment materials – a request that duplicated the process his organisation had already gone through with the ESFA to get on the register.

At last count there were 38 different bodies offering quality assurance, the majority of which assure just one standard.

Stephen Wright, the chief executive of the Federation of Awarding Bodies, wants the different bodies involved in EQA to work together to “tighten up and harmonise standards across the apprenticeship system” to “avoid the risk of poor regulatory practice, inconsistency and regulatory burden”.

A spokesperson for Ofqual insisted it was “committed to reducing regulatory burden” and that the requirements it placed on organisations “either currently or potentially regulated by Ofqual is both proportionate and appropriate”.

The watchdog is reviewing its guidance “to ensure that they are appropriately tailored for apprenticeship EPAs and the organisations delivering them”, he said.

“The bar for recognition remains unchanged but we are always looking to work with AOs to help improve and build on their understanding of our regulations.”