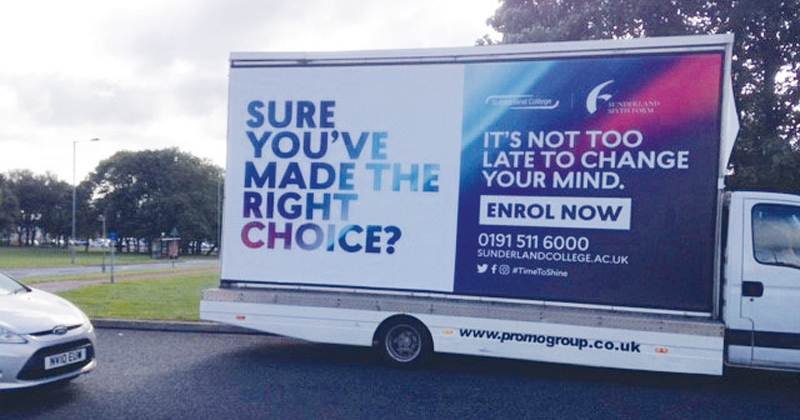 A college has been snapped touting for students right outside a rival’s campus – enflaming tensions sparked by a recent merger.

Sunderland College’s advertising van, emblazoned with the words “Sure you’ve made the right choice? It’s not too late to change your mind”, was parked at a junction outside the main campus of its neighbour East Durham College on Thursday morning.

East Durham’s principal Suzanne Duncan told FE Week that she was “really disappointed” by the van’s appearance outside her college.

Sunderland College however insisted that it had been parked there by mistake.

“An error was made by a member of staff and this is not a practice that the college endorses,” she said. “When were made aware we moved the van.”

Both colleges took part in the north-east area review, which ended in February.

The ensuing report recommended they both stayed independent, albeit “working with neighbouring colleges on a collaborative curriculum offer and participating in shared service company”.

But Sunderland opened a consultation on a proposed partnership with Hartlepool SFC before this report ever even saw the light of day.

That plan came as a surprise to many, as Hartlepool had come out of the Tees Valley area review with a proposal to merge with its closer neighbour, Hartlepool College, and FE Week has been unable to find anyone to explain the rationale.

Even Darren Hankey, Hartlepool College’s principal, admitted to FE Week that he had no idea what prompted the SFC’s change of heart.

A report by the SFC commissioner Peter Mucklow, who visited Hartlepool SFC in March after it was hit with a financial notice to improve, noted that there had been a “lack of progress” on the proposed merger between the two Hartlepool providers, and urged the SFC to take “decisive action”.

“Hartlepool Sixth Form College should proceed with the proposed merger with Sunderland College as a matter of urgency,” he wrote.

But the revised plan upset both Mr Hankey and Ms Duncan, who argued that a merger between two colleges in different areas would increase competition for learners – even though the area reviews had been established to encourage providers to work together.

They insisted that the area reviews had been designed to rationalise provision, especially given the decline in the number of teenagers in the area, which already had a crowded post-16 market, particularly in Hartlepool.

Sunderland’s principal Ellen Thinnesen told FE Week at the time that the merger decision would be taken in the best interests of the college.

“Any decision relating to merger with a neighbouring college will be strongly informed by Sunderland College’s resolute position on ensuring maximum value for public investment, greater specialisation – in this case sixth form provision, reduction in duplication, and most importantly keeping the needs of all young people at the forefront of decision making,” she said.