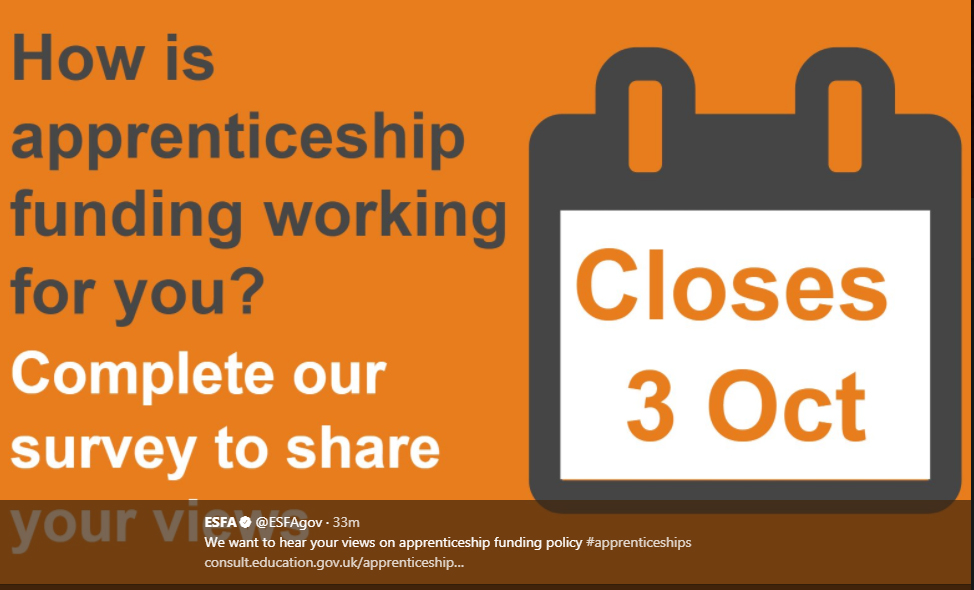 The Department for Education has put out yet another survey on how reforms to apprenticeship funding are affecting employers and training providers today – the fifth such consultation in four years, under four different ministers.

Described as a “short” questionnaire, the DfE is asking 32 questions on the impact of the apprenticeship levy.

This latest call for feedback follows consultations held in 2013, 2014, 2015 and 2016, but it’s the first since the massive funding reforms launched across England in May.

There has been much concern in the sector about the slow take up of apprenticeships since May, particularly among the young.

As a result, the ESFA wants to use quick feedback to inform its decisions on any significant changes to rates, formulas or eligibility from April next year, or even before.

“We are implementing apprenticeship reforms to continue to improve the quality of apprenticeships for all, providing the skills that employers need to reach our commitment of three million starts in England by 2020,” the DfE said.

“Throughout the reforms we have regularly gathered feedback from employers, providers and their representative bodies. This survey offers a further opportunity to comment on apprenticeship funding policy and how it is working for you and your organisation.”

The four skills ministers presiding over the consultations have been Matt Hancock, Nick Boles, Robert Halfon and now Anne Milton.

The survey will run from today until October 3. You can complete online here.

Questions in the survey include (paraphrased below):