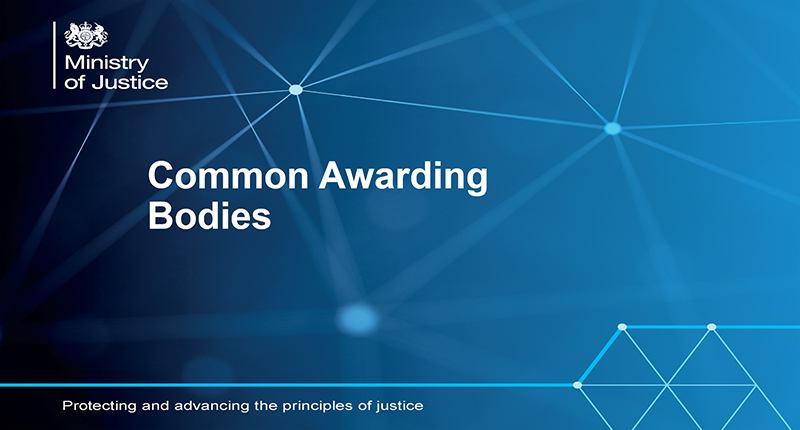 The Ministry of Justice intends to appoint single awarding organisations for seven areas of study, it has announced on the government tendering website.

The areas of study are to be English, ESOL, maths, ICT, catering and hospitality, construction, and cleaning and facilities, which between them it claims cover 42 per cent of its learning delivery. These, the MoJ says, are the curriculum areas which are studied by the largest numbers of prisoners and are most likely to be qualification bearing.

The initial approach to market will officially be opened on September 21, and the contract will run for a total of four years, from August 1 2018 until July 31 2022.

The MoJ says it “will not directly pay for the services provided by the selected awarding organisations, but instead mandate the use of particular qualifications for successor education providers.”

FE Week has learned that a “market engagement” event to outline the plan took place for interested awarding organisations earlier this month. In a presentation made at the event, which FE Week has seen, bid returns are expected by October 20, with the contract awarded on November 3.

The procurement appears to follow the Coates Review into prison education in May last year, in which Dame Sally Coates criticised existing provision.

“Currently there is too much variation between the requirements of different awarding bodies,” she wrote.

Recognising the difficulties reported by many prisons that learners are forced to repeat courses when they move within the prison system, she added: “Prison learners may have to start courses again if they move part-way through a course because their new prison’s education provider uses a different awarding body.”

The Prison Reform White Paper then published in November last year said: “we will introduce a core common curriculum across the estate, focusing on maths and English, and seek to use the same awarding bodies for particular types of provision so those starting a course at one prison can bank and build on their progress if they move elsewhere.”

If the plans go ahead, this would be the first time the government has succeeded in procuring single awarding organisations for qualifications.

Single awarding bodies is considered by some to be a high risk strategy, as there is no competition or alternative supplier were something to go wrong.

FE Week asked the MoJ about how it would manege these risks, and was told there would be “rigorous contract management arrangements in place to monitor the performance of the appointed Awarding Organisations and enable early action to address problems.”

The plan may be seen by some in the sector as a dry-run for the tender activity expected ahead of the forthcoming T-levels system, once their development continues. In July, the new skills minister Anne Milton announced a delay to the implementation of the new technical qualifications, which are now expected to launch in September 2020, a year later than first planned.

Plans to overhaul prison education were started under Michael Gove when he was justice secretary, and he certainly has history with the single awarding organisation approach from his time as education secretary.

Launching the GCSE reforms which came into force for the first time this year, he indicated that he intended to replace them with the English Baccalaureate, which would be offered by a single awarding organisation.

This reform did not come to pass, however, and in a statement to the House of Commons in February 2013, Mr Gove said: “Last September, we outlined plans for changes to GCSE qualifications that were designed to address the grade inflation, dumbing down and loss of rigour in those examinations.

“We have consulted on those proposals and there is a consensus that the system needs to change. However, one of the proposals that I put forward was a bridge too far.”