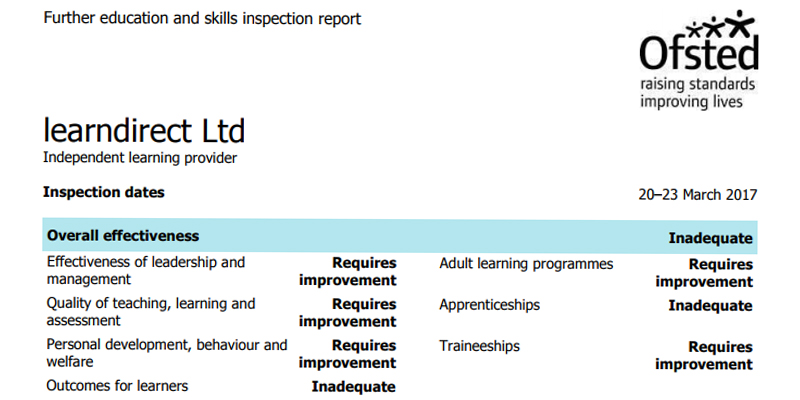 Ofsted has this morning published their inspection report for Learndirect, the largest training provider in the UK. Download here.

This follows a failed legal bid by Learndirect to quash the grade four report, and FE Week’s successful overturning of a gagging order.

Ofsted observed in their report that “directors and senior managers failed to take swift and decisive action to stem the decline in performance over the past three years.”

Apprenticeships, which received a grade four, was of particular concern. “Too many apprentices receive insufficient training to develop new skills, and they do not receive enough off-the-job training,” it said.

In particular it added: “Leaders and managers at all levels of the organisation failed to oversee and challenge the particularly poor provision delivered by apprenticeship subcontractors.”

But the criticism was not confined to Learndirect’s apprenticeship programme. Ofsted found that “too few adult learners secure employment when they leave Learndirect,” and “too many 16- to 19-year-old learners on traineeships do not complete their programmes”.

Leadership and management was awarded a grade three, as they had “begun to tackle the main weaknesses; early signs of improvement indicate that their actions are beginning to have an impact.”

And tutors of adult learners were singled out for providing “good support”.

“However, managers still do not have timely and accurate data with which to monitor all areas of performance,” it was added. “For example, information used to measure the current progress of apprentices is weak and generates unrealistic predictions for end-of-year results.”

The report added: “The lack of an effective system to monitor the progress of current apprentices, means that managers’ predictions of an improvement in achievement rates lack credibility.”

Leardirect is one of the largest providers of apprenticeship courses, with the report outlining: “There are almost 23,000 apprentices currently on programmes with learndirect. The great majority of apprentices are the employees of small to medium-sized enterprises.

“The majority of apprentices are adults, spread evenly between intermediate- and advanced level qualifications.

“Learndirect trains the majority of apprentices directly, with the remaining apprentices trained by 24 subcontractors.”

It goes on to describe how: “Seventy per cent of apprentices in 2015/16 fell below the minimum standards for overall achievement. Six out of ten apprentices did not achieve their apprenticeship within their planned timescale.” See figures below.

Despite the grade now being published, the Department for Education is giving Learndirect special treatment and is not issuing a three month termination notice.

However, the Department for Education has confirmed to FE Week that Learndirect Apprenticeships Ltd, which was incorporated last year, will not be able to work with small employers as is not being invited to participate in the non-levy procurement process.

A spokesperson for Learndirect told FE Week: “Ofsted’s inspection was challenged because we believe the process did not give a true reflection of Learndirect Limited’s training quality and performance.”

When the gagging order was lifted on Monday, Ofsted told FE Week: “We are very pleased with this outcome. Seventeen inspectors took part in this inspection over four days [in March] when they spoke to learners and apprentices. Inspectors interviewed employers, apprentices and learners in person and over the phone, reviewed portfolios of work, and looked at progress reviews when they gathered evidence.

“As well as visiting apprentices in their workplace, inspectors also reviewed a wide range of evidence to ensure that both the judgements and inspection grades were secure”.

A spokesperson for Learndirect said this morning, following publication of the report: “We’d like to reassure all our learners, employees, suppliers and partners that learndirect Limited is financially stable.

“Like all providers in the sector, we’ve had to manage a reduction in central government funding. These funding reductions were made at short notice and required significant changes to the business for it to remain viable.

“Our new senior management team, with the support of our stakeholders, has moved quickly to ensure the business responds to the challenges this poses.

“This includes diversifying our income streams and starting to address areas that require development.

“Ofsted’s report acknowledges the improvements being made in this area and the business has moved on further since the inspection in March 2017, with rising learner satisfaction scores and success rates.”