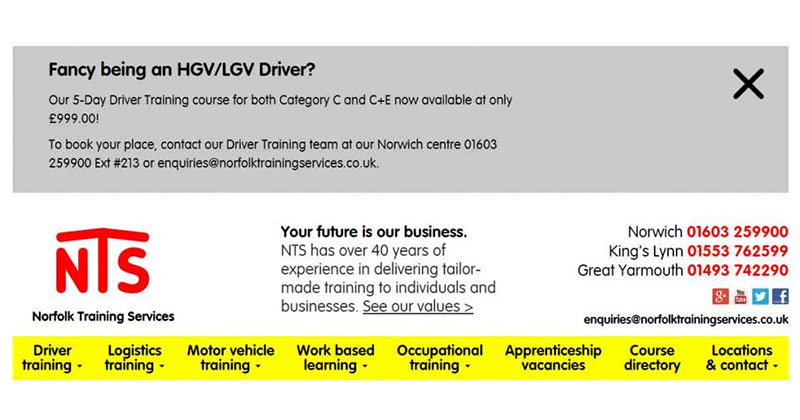 A Norfolk-based provider that was hit with a grade four Ofsted rating in May has entered into administration, FE Week understands.

The news on Norfolk Training Services was confirmed this afternoon to FE Week by administrators Larking Gowen.

FE Week reported three months ago that the provider had received the lowest possible overall-Ofsted rating. The report included grade fours for effectiveness of leadership and management, 16 to 19 study programmes, and quality of teaching, learning and assessment.

The Education and Skills Funding Agency was unable to confirm ahead of publication if NTS’s £1.3 million government funding – as of June this year – had been pulled as a result of the Ofsted rating.

It is though normal practice for independent providers to be given a termination notice of their skills funding contracts, after receiving a grade four.

FE Week, which attempted to contact NTS ahead of publication without success, received an email from an employee claiming to be from the company, lamenting the distressing developments.

“Staff were informed at 12pm, most of whom were laid off with immediate effect.”

When asked if this was true, a representative from Larking Gowen would only say: “Yes that is correct.”

The provider had made it onto the new apprenticeships register when it was quietly revised in April, after the ESFA revisited a number of applications in exceptional circumstances.

When the report was published in May, it revealed the provider had received a grade four overall but a grade three for its apprenticeship provision – which meant it was eligible to be on the register.

In the report, inspectors criticised leaders at the independent training provider for their “ineffective” efforts to “improve the weaknesses identified at the previous inspection” in February 2015, which resulted in a grade three rating overall.

“Leaders and managers do not identify most weaknesses accurately or plan to rectify them swiftly,” the report noted.

However, inspectors noted in its first monitoring visit since then, published last week, that leaders had established a quality improvement plan that features a “comprehensive range of actions to rectify all the weaknesses identified at inspection”.

Managers were said to have “intensified” their actions to support and challenge tutors whose practice was as below expectations.

The administrators provided the following statement on August 17:

Andrew Kelsall and Lee Green of Larking Gowen were appointed as joint administrators of Norfolk Training Services Limited on August 16.

The Company is the leading independent provider of apprenticeships and logistics training in Norfolk and operates mainly from sites on Hall Road Norwich, but also in Great Yarmouth and Kings Lynn. The Company has approximately 60 staff and 400 apprentices in training.

Andrew Kelsall, head of business recovery at Larking Gowen said “Obviously, this is very disappointing for all involved from employees, apprentices, directors, shareholders and creditors, but with the company having incurred trading losses over past months and no predicted upturn the company has simply exhausted all working capital.

“The company has been placed into administration to avoid further losses and will to cease to operate.

“We will contact all employers, apprentices and trainees to inform them of the situation and will enter into discussions with the ESFA regarding the continuity and completion of apprenticeship training.”

Mr Green added that the ESFA would be making contact directly with the apprentices and employers/Guardians regarding the provision of future training.