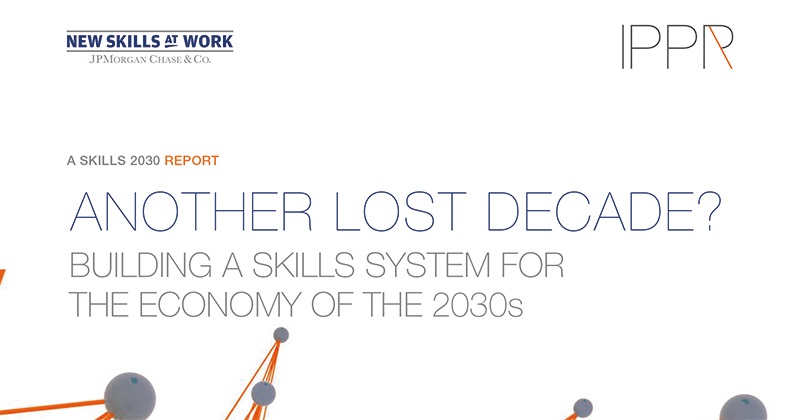 The apprenticeship levy needs a radical rethink to double investment in skills, according to a new report from a leading think-tank.

The so-called “skills and productivity levy” proposed by the Institute for Public Policy Research would be paid by more employers, and spent on a wider range of training.

It’s one of a number of recommendations in the IPPR’s new report, ‘Another lost decade? Building a skills system for the economy of the 2030s’, which sets out ways to reform the skills system and boost productivity.

“Although the apprenticeship levy will help boost employer investment in skills, it would neither bring employer spending back to the levels of a decade ago, nor would it bring us close to the EU average,” the report said.

“In the absence of further public investment and demonstrable underinvestment by employers, we recommend that the government expands the apprenticeship levy into a wider ‘skills and productivity levy’ in order to help prepare the UK’s workforce for the challenges ahead.”

The IPPR’s proposed replacement levy would apply to all firms with at least 50 workers, with the largest firms – those with at least 250 staff – paying a higher rate than smaller firms: one per cent of payroll, rather than 0.5 per cent.

The cash raised should be “redeemable not just for apprenticeship training, but for basic skills training, high-quality vocational education and training, and business support”, it recommends.

These proposals would have raised an estimated £5.1 billion in 2017/18, the report said, more than double the projected income from the apprenticeship levy as it stands.

Of this amount, £1.1 billion would go into a regional skills fund, created through a ‘topslice’ of a quarter of the contributions from the largest firms, to ensure the money flows where it’s most needed.

The think-tank also wants to abandon the government’s controversial three million apprenticeships target, and to “boost both the quantity and quality of apprenticeships”.

Other recommendations include the introduction of a personal training credit worth up to £700 for low-skill adults who are either out of work or in low-paid jobs, and a £2,000 personal retraining allowance, “for workers who are made redundant and lack an NVQ level three to invest in upskilling”.

It calls for a “modified Sainsbury framework for technical education” like the one being developed for T-levels, for learners aged 16 to 19 – to be implemented for adult learners.

The report also wants a cross-department minister for productivity and skills who would be “responsible for bringing together government agendas on education and skills, industrial strategy, productivity and growth as part of a new national mission to improve workplace performance and job quality”.

A Department for Education spokesperson said: “Through our reforms to apprenticeships, we are investing in the skills, productivity and career opportunities for millions of people.

“Our employer survey showed that 76 per cent of businesses said that their productivity significantly improved as a result of being involved in apprenticeships. We are also addressing the historical underinvestment in skills by putting the funding for apprenticeships firmly in the hands of employers, encouraging them to invest in high-quality training.”