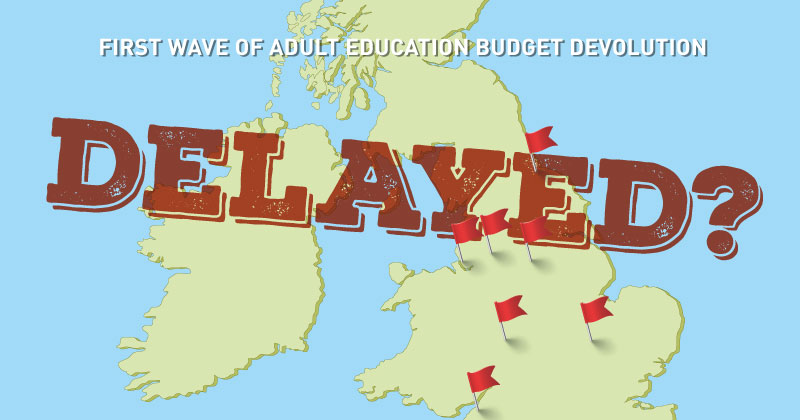 The first wave of adult education budget devolution deals are likely to be delayed beyond the planned 2018-19 delivery date because the timetable no longer seems viable for the government, an FE Week investigation has found.

Over the past two years, seven combined authorities have agreed devolution deals with the Treasury, which include powers to deliver the AEB, and have elected metro mayors ahead of its scheduled introduction in September next year.

But five of the seven have told FE Week that while they want to deliver on time, they are not confident that the timescale is realistic at the government’s end, given the disruption of various local elections, the EU referendum and the unexpected general election over the past few years.

The Department for Education has meanwhile also refused to commit to its own timetable for delivery.

“While we are taking every possible step within our gift to hit the 2018-19 timetable, meeting it is going to be a significant challenge; a challenge made all the more complex by the unsettled political landscape of the last 12 months,” said Sean Anstee, Greater Manchester combined authority’s lead for skills, employment and apprenticeships, who first signed a devolution deal in November 2014.

Meeting it is going to be a significant challenge

He said that to successfully transfer powers, both central government and Greater Manchester “must be ready and primed for the move”.

To this end, the authority has invited the DfE to confirm whether the timeframe is still viable – but it has had no response.

The four other combined authorities that share these concerns include the West of England, Sheffield City Region, Cambridgeshire and Peterborough, and Liverpool City Region.

Cambridgeshire and Peterborough combined authority, which signed its deal in March this year, explained that its next steps for AEB devolution include agreement from central government on the statutory orders that were to be laid in parliament – but these orders have been delayed as a result of the general election.

The authority does not currently know when this will happen, and the delay means it does not yet have final details on the criteria for the allocation of AEB funds and the total sum to be devolved.

Sheffield City Region meanwhile agreed a devolution deal in October 2015. A spokesperson said its approach is “simple and pragmatic” and that it will do “everything we can to get ready to meet our 2018/19 timeframe”. But he added that “ultimately”, it will be “up to government to decide if the current timetable is still realistic for them”.

The two other combined authorities with AEB devolution deals, the West Midlands and Tees Valley, both told FE Week that they remain confident the 2018 delivery timetable can be achieved.

David Hughes, chief executive of the Association of Colleges, said it will take a huge national effort to meet the 2018 delivery date.

“It is almost two years since the deals were first announced and their value is undermined both by inflation and also by uncertainty on future European Social Fund arrangements,” he told FE Week.

“Colleges have continued to work with combined authorities and local enterprise partnerships on their plans but it will require a concerted national effort to meet the 2018 timetable.”

FE Week asked the DfE if ministers expect any delay to AEB devolution beyond the planned timescale but a spokesperson would only say that more details on the plans would be available “in due course”.

London is also in the pipeline for an AEB devolution deal.

Chancellor Philip Hammond announced this in the autumn statement last year and said plans were for AEB devolution to be delivered in 2019-20.

But a spokesperson told FE Week that while the mayor of London’s office was “hopeful” of achieving the planned timescale, it was still subject to central government “increasing their pace in supporting transition arrangements”.

In 2015 former chancellor George Osborne fronted the Cities Devolution Act which paved the way for AEB powers to be devolved to major cities and city regions, saying at the time that this would give them “levers to grow their local economy”.

But there have been numerous concerns about the lack of detailed plan for providers and employers.

In May last year, FE Week reported that the Education and Skills Funding Agency had not decided how the AEB devolution system would work for providers that cross regional boundaries.

We asked the ESFA if it had any new guidance for providers and employers, but were again told that details would be “available in due course”.