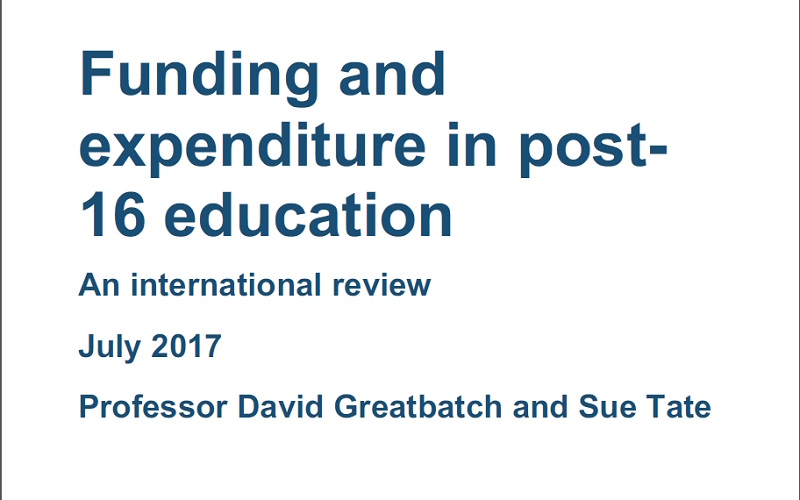 The Department for Education has been accused of ignoring skills funding concerns after its international review of post-16 funding included no financial comparisons with England.

But funding comparisons with England were notably absent.

Mick Fletcher, an expert in FE funding systems and a visiting research fellow at the UCL Institute of Education, hit out at the government’s decision to exclude comparisons.

“It’s very strange; the first question any serious commentator would ask is ‘how does this compare with England’ yet the report shies away from it,” he said.

“It seems to me clear both from the structure of the report and the timing of its release that the DfE was anxious not to draw attention directly to the relative underfunding of English FE.”

David Greatbatch, a professor at Durham University and one of the report’s authors, said the DfE had set the research questions, did not stipulate a need for comparisons.

The report is 107 pages long and presents its findings in a table comparing the five foreign countries, “yet does not feel able to put alongside these five the comparable data for England – data which must be far more accessible to the researchers,” Mr Fletcher said.

He pointed out that the report’s conclusion makes up only half a page in a hefty document, and he suspects that researchers were “instructed to make no comparisons and draw no conclusions”.

A DfE spokesperson said the purpose of the research had been to “develop the department’s understanding” of how countries with leading technical education systems fund their systems – “so we are able to learn from them for our reforms and ensure we are providing young people with a world-class technical education.”

The department said direct comparisons between England and other countries was impossible because information and data is not collected or available on a comparable basis in each country.

But Mr Fletcher claimed the DfE was trying to hide uncomfortable results.

“It is odd however since the report contains information that makes such a comparison possible, and moreover proposals to increase funding for T-levels effectively concede the charge,” he said.

“I conclude that what the DfE may be doing is making the information available to a specialised audience but not making it too easy for the tabloid press to embarrass the government.”

He added that while the DfE did try to hide comparisons with England, material in the report does allow comparisons to be made.

“To give just one example in all countries studied vocational students receive around 1,000 teaching hours per year. In England it is currently 600 with the aspiration to move to 900 in a few years’ time.”