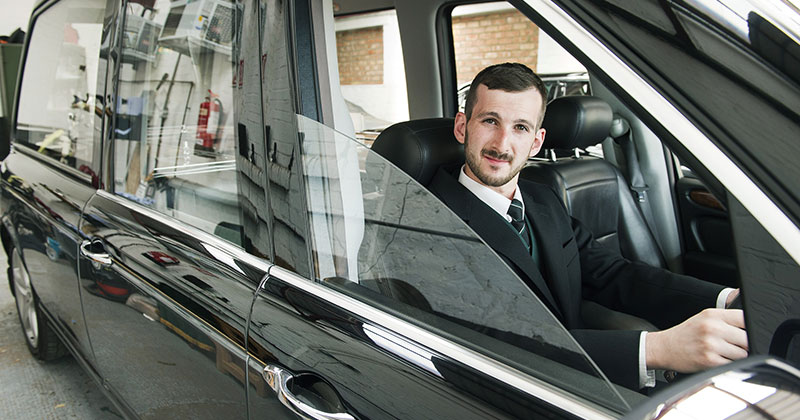 A former waiter in a Grimsby fish and chip shop is hoping to become a funeral director after taking up an apprenticeship in funeral care. Samantha King reports.

Ryan Coombes spent four years working in his local fish and chip shop before deciding he wanted to pursue an alternative career, applying for an apprenticeship within the funeral industry.

He has now become the 2000th apprentice on the Co-op’s apprenticeship scheme in funeral operations and services.

Explaining his decision to move into the funeral industry, 23-year-old Ryan said: “I always felt like there was something more rewarding for me to do out there because I enjoy helping people and this is definitely the business for it.

“I was doing food orders all day and now I’m dealing with the deceased. It’s a completely different job. “My dad moved to the funeral industry after spending 18 years elsewhere and really enjoyed it, and my uncle has also worked in funeral services for 27 years, so it has always been around in the family.”

Since its launch in 2013 the apprenticeship scheme has attracted a diverse range of applicants, from classical musicians and plumbers, to detective sergeants and cabin attendants, with approximately 500 new apprentices joining every year. In 2016, there was an average of 40 to 50 applicants to the scheme every month.

“I think younger people are more accepting of funerals as a celebration of life rather than simply mourning, and therefore more willing to come into the business,” Ryan said. “It is hard to recruit in though as a lot of people think it’s a bit morbid.”

Delivered in partnership with Learndirect, apprentices can work towards a level 2 and level 3 certificate in funeral operations and services.

Jenny Atkinson, head of HR for Co-op Funeralcare said: “Working within the funeral industry can be an extremely rewarding and satisfying career.

“Our intention has always been to provide people from all walks of life with the opportunity to develop a worthwhile career in funerals. Providing they possess compassion, empathy, excellent service and organisational skills, we can teach everything else on the job.”

Ryan – who has a degree in criminology – is currently receiving training at Kettle Funeral Directors in Grimsby.

“Before I did this job I’d never been further than the outskirts of Grimsby, and this job takes me from Skegness to Hull and Doncaster, so I’ve got a lot of experience of driving now,” he said.