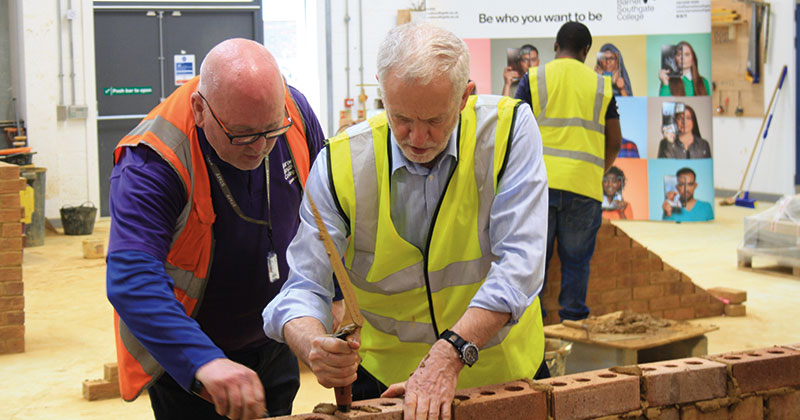 Labour leader Jeremy Corbyn tried his hand at bricklaying during a visit to Barnet and Southgate College.

Mr Corbyn met with students at the college’s construction training centre, where he had a go at laying bricks using cement and lining them up to create a wall, under the watchful eye of construction tutor Vincent O’Brien (pictured left).

Commenting on the Labour leader’s bricklaying efforts, Mr O’Brien said: “Jeremy was very good; he picked up instruction and just got on with it. He would make a great bricklaying partner.”

Mr Corbyn’s visit came following an address at the British Chambers of Commerce earlier in the day, where he discussed the importance of training to build a high skills economy.

During his trip to the north London-based college, he also took part in a roundtable discussion with a group of apprentices training in health and social care, IT, business, plumbing and hairdressing.

Level 2 NVQ hairdressing student Kayleigh Hopwood had the chance to demonstrate her hair styling skills to Mr Corbyn during his tour of the college’s facilities, and said: “I was nervous at first but it was great meeting him. He asked me about my course and what I wanted to do at the end of it. He really showed an interest and made me feel at ease.”