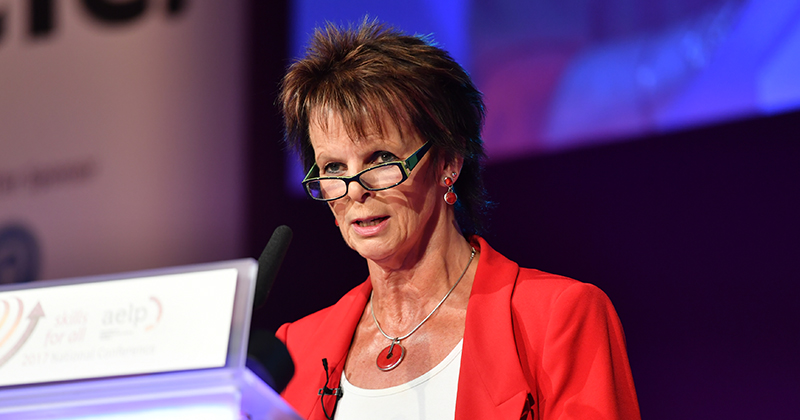 The construction industry will not be released from the “double whammy” of levy charges it currently pays, the new skills minister has revealed.

The government will continue to back the Construction Industry Training Board, which is part-funded by its own levy on employers in the sector – even though the Confederation of British Industry has complained that the fee is being charged alongside the wider apprenticeship levy on all employers which have a payroll of more than £3 million.

Anne Milton (pictured above) has now backed the arrangement in a letter to the CITB chair James Wates, which was published today ahead of the full results of a government review into industry training boards which is due in the autumn.

On the same day that she confirmed government support for the separate Engineering Construction Industry Training Board, the minister wrote that “colleagues in the industry will want to know when they cast their votes whether or not the government is likely to conclude that CITB should continue with levy-raising powers.

“We are therefore writing to confirm that, having reviewed the options for making sure that the construction industry has the skills it needs, we have concluded that the CITB should be retained.”

The letter, co-signed by minister for housing and planning, Alok Sharma, and senior peer Lord Prior, also suggested that if the industry rejects proposed reforms to the CITB  and opts not to support the levy, “the CITB may have to close”.

Acknowledging that “there is concern across the industry about the effectiveness, efficiency and responsiveness of the CITB”, she also warned that the government’s ongoing support for the construction body would be dependent on its current reform programme being “seen through”. Mr Wates (pictured right) said he appreciated Ms Milton’s “confirmation that the CITB should be retained, provided industry supports it”.

“Rest assured that CITB has listened – and will continue to listen – to concerns of industry,” he said.

The CITB recently sold its awarding body, Cskills, to NOCN, to enable it to focus on its primary function as an industry sector skills council, and to remove any conflict of interest as it develops skills standards for the sector.

The body, which supports training in the construction industry, is in the middle of consulting on its levy proposals – a statutory requirement that takes place every three years.

The government’s consultation into the future of both the CITB and the ECITB was launched in February.

According to Ms Milton’s letter, while the full report had been due in the spring, publication has been put back until the autumn due to the general election.

Both bodies charge firms a levy to support training in their industries – but grave doubts have been raised about the sense of maintaining these levies alongside the apprenticeship levy, introduced in April.

The CBI warned in 2015 that “it’s important that employers are not hit by a double-whammy”.

The apprenticeship levy was launched in April, and affects all employers with a payroll of more than £3 million.

Ms Milton’s letter acknowledges that some construction employers had “expressed concern” about the affordability of paying two levies.

“But the purpose of the apprenticeship levy is quite different from the industry training levy: it is specifically to support and incentivise investment in apprenticeships,” she said.

Ms Milton wrote separately to the chair of the ECITB, Shirley Watson, to confirm the government’s continued support.

“We have therefore concluded, and have decided to confirm now, that the ECITB should be retained,” she wrote.

Chris Claydon, ECITB’s chief executive, said: “We welcome the minister’s recognition of the importance of engineering construction to the economy, the need to continually drive skills growth in our industry, and the role of the ECITB in delivering this.”