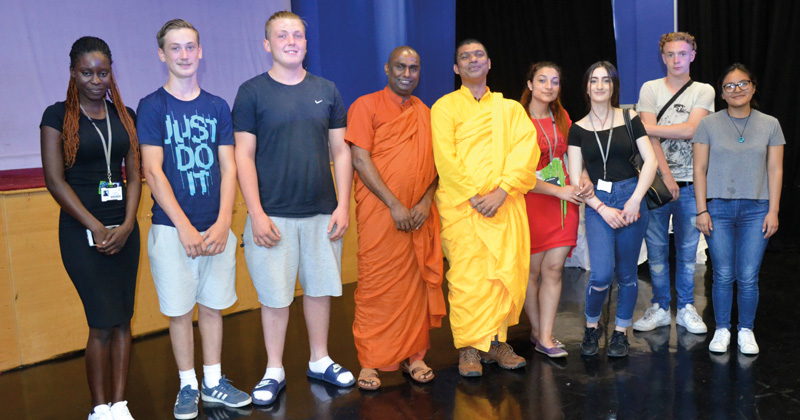 A pair of Buddhist monks paid a visit to the College of Haringey, Enfield and North East London to teach students about their religion.

Venerable Konwewe Ariyarathana and Venerable Ragama Sugathananda spoke for an hour to an audience of 70 staff and students about the Theravada Buddhist tradition, which is marked by its strict adherence to the original teachings expounded by the Buddha.

During their talk, the pair covered the history of Buddhism, their lifestyles, the robes they wear and how they serve and support their communities.

The visit came about after the college’s director, Marcia Summers, met Mr Sugathananda – who is the chief incumbent of a Sri Lankan charity run by Buddhists – on a charity trip to Sri Lanka in 2014.

“They gave a captivating and informative talk on Buddhism that gave a real insight into the religion, which sparked a lot of interest among their audience,” she said.

“It was great to see so many learners from different backgrounds and college courses attend the enrichment activity, which promoted tolerance and peace in currently challenging times.”

Following the talk, the college is now planning a visit to a Theravada temple in Chiswick, the London Buddhist Vihara, following an invitation from Mr Ariyarathana.